A hectic February has seen Bradford Vikings venturing away from the computer and off to York, Edinburgh and Saltaire, to discuss Vikings with audiences of all ages and levels of experience.

For ‘Meet the Expert’ at the Jorvik Viking Festival, a large number of visitors to Barley Hall heard about scientific developments in the study of Vikings, hunted for clues in archaeological finds trays and tried their hand at Viking cord making. They were ably and enthusiastically assisted by Danielle, Rachel and Charlotte from Bradford University and Viking re-enactor Jane Outram, who demonstrated how she used tablet weaving to produce amazing patterned bands. 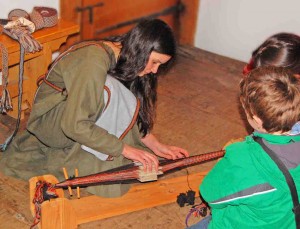 This was followed by presenting a poster about the project at ‘Scotland in Early Medieval Europe’ International Conference organised by the Society of Antiquaries of Scotland. The meeting had some particularly interesting updates on recent excavations in Scotland and beyond. There was also chance to visit the ‘Vikings!’ at the National Museum of Scotland. This is a fantastic exhibition which includes some significant objects from the Swedish History Museum which have rarely been on display outside Scandinavia. Amongst the undeniably impressive metalwork, my favourite was a display of nails in the shape of a boat. Worth looking at the images of Flickr, if you can’t get there in person.

Have a look at the Bradford Vikings conference presentation here

The final trip was to Saltaire Primary School to set up a ‘Rot or Not?’ experiment with Year 3. We are looking at what materials might survive in different archaeological conditions. Here are some instructions if you want to have a go for yourself. A future blog will tell you what happens!

Rot or Not Activity Sheet