After the hectic rush of activities last month, the last couple of weeks have been spent in rather more measured contemplation of Viking Age dates.

Whilst there are lots of exciting scientific dating methods available to archaeologists- archaeomagnetism, luminescence, tephra, dendrochronology- over 90% of the dates for North Atlantic sites are produced with radiocarbon dating. It’s a great method which can date a wide variety of archaeological materials and can give really precise dates. However, like so many scientific developments, it’s not as straight forward as it first appears. One of the key problems is the way that carbon circulates within the oceans means that creatures from a marine environment can appear to be much older than they really are. Fortunately it’s possible to correct for this effect, and so I have been applying these corrections to the dates from butchered walrus bones from sites in Greenland. The problem doesn’t just affect marine creatures but also influences people who eat them, and so corrections also have to be applied to dates from human remains. You really are what you eat!

Often these corrections have the effect of making date ranges wider, which is a bit depressing if you want precise dates for archaeological events. However, help is at hand in the rather unlikely form of Thomas Bayes, an 18th century minister, who proposed a statistical theorem which allows you to combine radiocarbon dates with other archaeological information, for example the relative position of dated material on site. Its powerful stuff and if you want to know more the Oxford Radiocarbon Accelerator Unit is a good place to start. I brushed up my skills on their excellent short course in radiocarbon dating.

Hopefully, the outcomes of this work will be ready for presentation at the Nordic Theoretical Archaeology Group conference next month. It promises to be a fascinating meeting with sessions on folklore, materiality and (of course) chronology. 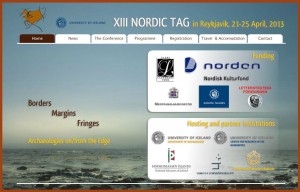