Both the academic and the public engagement aspects of the project have been busy recently with the North Atlantic Biocultural Organisation (NABO) meeting in Iceland and the Festival of British Archaeology in York.

NABO means ‘neighbour’ in many Scandinavian languages and the organisation aims to encourage communication and collaboration among scholars interested in the North Atlantic region. The annual meeting in Akureyri, Iceland was an excellent showcase of the diverse range of sites and methodological approaches under investigation in the region. The Bradford Vikings contribution was a poster on this project and a paper with Magdalena Schmid, University of Iceland, discussing scientific dating of Icelandic sites. The highlights of the meeting were some fascinating accounts of long running field projects from Alaska to Norway; the range of archaeological, anthropological, scientific and literary approaches employed and, of course, the excellent hospitality.

Back in York, Bradford Vikings ran a workshop for the Festival of Archaeology at Jorvik DIG, in collaboration with York Archaeological Trust. In addition to the ever popular Dustbin Detectives and poo excavation, we experimented with metal casting to produce Thor’s hammers. Unfortunately silver was beyond the budget and health and safety restrictions of the project, but chocolate provided an acceptable substitute. 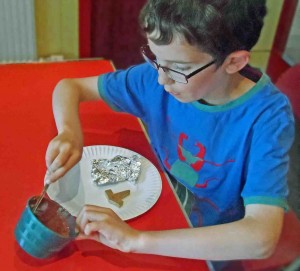 The next few weeks will be focussed on more data analysis / analysis of dates and preparation for the Orkney International Science Festival. If you are in Orkney, do come and visit. Bradford Vikings is running ‘Getting hands-on with the Vikings’ as part of the Family Fun Day, assisted by Viking re-enactor Jane Outram, and presenting results from the project in session entitled ‘Dating Vikings’.  The combination of activities and discussion will make a fitting end to this part of the project.