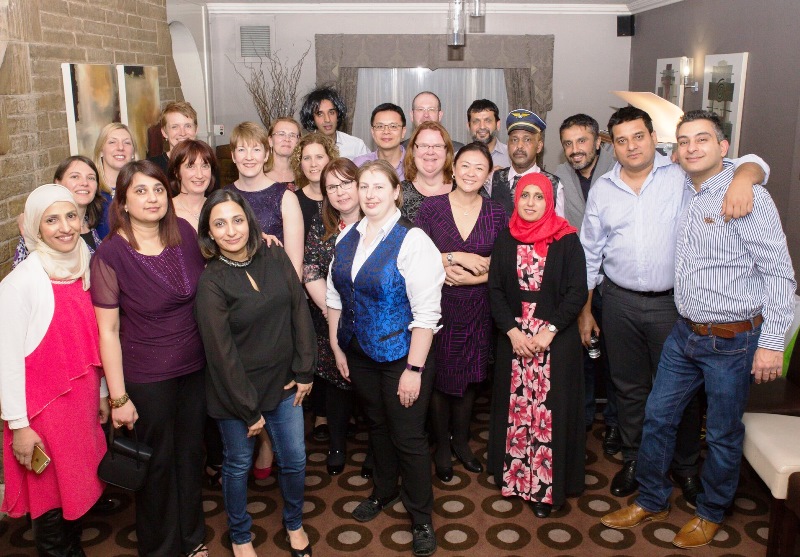 Members of the BPharm Pharmacy Class of 1997 – 20 Year Reunion

With any project, you need inspiration, motivation, persistence and a vision and this ‘project’ certainly needed it!

The inspiration was provided by my 11-year old daughter who didn’t believe I had any friends; she’d notice my limited nights out!! So, a wager ensued. I informed her of the eclectic mix of friends I had at University and the wonderful time that was had (this was, of course, the censored version of events given her age).

Onto the motivation… this was personal. Being guilty of not keeping in touch over the years the main driver was putting people back in touch even if they couldn’t make it to the reunion. There’s no reason why in the smartphone era we live in now that people can’t stay connected. It felt criminal to me that the group should have stayed out of touch for so long. It did, however, get me thinking about my own personal means of communicating home twenty years ago….my invaluable BT phonecards and the JB Priestley Library phone in the foyer- that was the means of getting in touch, e-mail and the Internet were merely in its infancy, now I do feel my age… 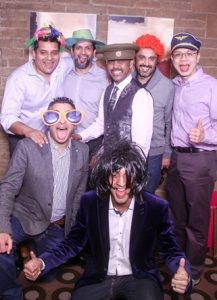 Fancy dress went down a treat in the evening

Organising a reunion was never going to be plain sailing and it soon started to become a painstaking journey requiring much persistence. I had hoped that I would find the ‘networked gurus’ of the group very early so that I could reach five to ten people at a time, unfortunately, I didn’t find them! Quite honestly, I began to lose hope a few months in….it was proving a real challenge, Google, Facebook, LinkedIn for all their merits can only get you so far.

So what to do? I went to the University’s Alumni Office and Mandy and the team were great, they managed to track down individuals still on their list.  This does rely on individuals keeping contact details up to date, however, I found a handful of colleagues, many of whom I wouldn’t have found from other routes, so thumbs up to the Alumni Office!

I then had what I thought was a masterful idea.  By asking the GPhC to contact people directly based on their name and membership number I thought I’d struck gold but sadly not… Data protection rules put a stop to that! However, it didn’t stop the search – right up until the last week it was a case of trying to track people down, persistence or borderline obsession I’m not sure which one it was. 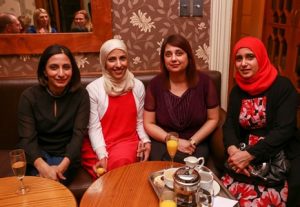 Time to catch up and reminisce

Perhaps the most disappointing feeling was when people really wanted to make the event but for whatever reason couldn’t. It’s a big ask to step away from personal commitments and in some cases to travel around the world. On a personal level, I did feel as though having found people I was letting them down if they couldn’t make the date- however, as with any event, it’s hard to co-ordinate all diaries.  However, that said, all in all out of 85 students 65 were tracked down of which 26 attended the event, not bad for a first attempt……leading on to my vision/goal….

As Bruce Lee once said, “A goal is not always meant to be reached, it often serves simply as something to aim at.” Well, never has a martial arts expert made so much sense to me than on this journey!

I had a simple goal at the start, to hold a reunion with enough people to make it a memorable event for the participants (oh, and to prove my daughter wrong). This goal was easily surpassed.

I didn’t expect colleagues from Malaysia and Ireland to attend … It’s fantastic to know that the draw of the reunion was far-reaching and that they were able to make such a commitment.  It did, of course, put more pressure on the event as I didn’t want them to turn up to an event in my lounge with a packet of crisps and a cold drink! 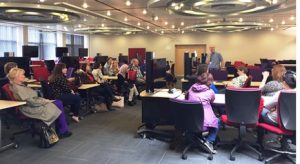 ‘Social Learning’ with Dr. Jon Silcock at the University

I didn’t expect to have such great support from the University and see some of our former lecturers. The tour of the Pharmacy Department was exceptional and really added to the whole experience, bringing back fond memories but also realising how much the learning environment has changed over twenty years. Special thanks to Jon Silcock for the tour, and John Purvis and Rob Forbes for freeing up their Saturday afternoon to come along.

The evening dinner and dance at the Dubrovnik as you’d expect was a cracking event with many memories easily captured in today’s smartphone area, it’s probably a good job we didn’t have those twenty years ago! 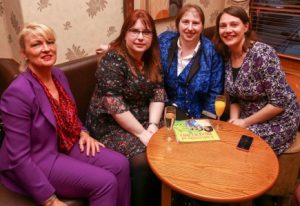 If you are planning a reunion in the future be prepared for an overwhelming show of gratitude from your colleagues. I didn’t expect it but on reflection, I can understand why. When you create an environment over a weekend with colleagues that unarguably had their best period of life together at University, it generates an excitement of its own when you put them back together in a room.

The conversation can transcend from reminiscing about the last minute cramming for a Pharmacognosy exam to current life challenges and all with strangely familiar faces (slightly aged of course!). Friendships are rekindled and for many these may now be lifelong. It is such a rewarding experience, believe me, I underestimated the happiness it generated on a personal level. 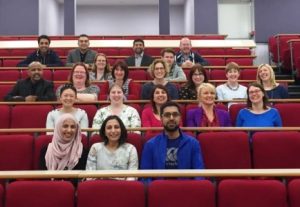 Finally, I must thank all my colleagues that made the event and equally those that were part of the experience along the way but couldn’t make it. You all contributed to an amazing experience. Friday nights will not be the same without the What’s App banter, some of it was side-splittingly hilarious but helped create a buzz.  Well done all! I’ve already been asked when the next reunion will be……that’s an interesting dichotomy, the sequel is rarely as good as the original but who knows maybe just maybe there will be another one, time will tell…hopefully it won’t be twenty years away!

great to know u managed a reunion
i graduated from Bradford with a degree in Pharmacy in 1977 and would be great to see some familiar names and faces
at that time we had the option to do the three year straight course o the 4 years sandwich course and i did the three year course.

Hi naresh, thanks for your comment. Please email alumni@bradford.ac.uk with your query and we will try and help.