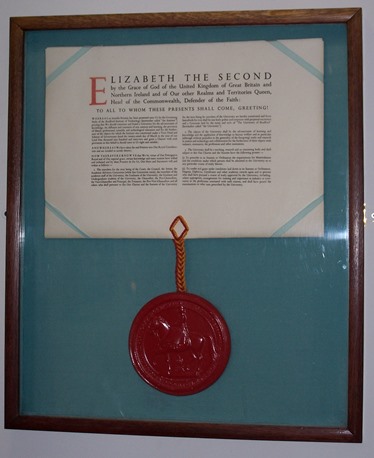 At noon on 18 October 1966, the Royal Signature of Queen Elizabeth II granted the Royal Charter by which the University of Bradford was founded. As a College of Advanced Technology, the Bradford Institute of Technology, the organisation already had the staff, students, buildings and facilities of a university. All that was needed was the formal recognition of university status.

Saturday 5 November saw the ceremonial birth of the University, a day shared with the city of Bradford. A service in Bradford Cathedral was followed by a splendid procession around Bradford, the first outing for the new Mace and the academic dress (robes and hoods) of the new university. 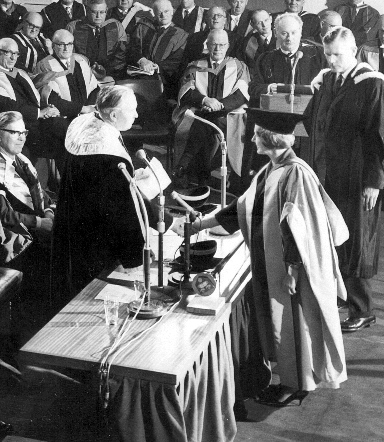 Harold Wilson, awarding Barbara Castle with an Honorary Degree in 1966

At St George’s Hall, the new Chancellor was ‘installed’: then prime minister Harold Wilson. He then bestowed the first degrees of the University to honorary graduates including Bradford’s Barbara Castle.

You can find the stories of the Charter, the Coat of Arms, the Mace, the Academic Dress, and the long struggle for a University for Bradford in our 100 Objects exhibition.

Who remembers Charter Day or the Installation?  We’d love to hear from you if so. Email your memories, stories and photos to alumni@bradford.ac.uk

I came to Bradford in 2000 in the new post of Special Collections Librarian, initially set up with funding from RSLP to make the important but underused Special Collections better known. I had previously worked at Manchester Metropolitan University and Nottingham University, and studied medieval history at York and librarianship at Sheffield. Bradford offered a wonderful opportunity to create a service from scratch and to make a real difference to the experience of users. Our success was demonstrated in 2014 when we became the first ever English university to achieve the new Archive Accreditation standard which was recently upgraded to full in July 2016.