What were you doing in June 50 years ago?

Well a group of Bradford chemistry students know exactly what they were doing, they were celebrating graduating. In 1967 they had just completed a four-year thin sandwich course in Industrial Chemistry at Bradford. Only the second group to celebrate a degree in Chemistry at the newly formed University.

They were a diverse bunch coming from all parts of England to study. Some had gained their entrance qualifications via part-time study and some came directly from A-level study so they were quite a mixed bunch with regards to age and original qualifications. One thing they had in common was a desire to learn and to become part of the “white hot technological revolution”

Over the four years, they were to become quite a close group participating enthusiastically in University life. Joining clubs, going to the Saturday dances and taking part in the usual sports, rugby, football, water polo, 10 pin bowling, rock climbing etc. There was even a dining club, although it didn’t compete with the Bullingdon club.

After graduation, there was the usual dispersion to all parts of the globe, USA, Canada, South Africa, New Zealand, Switzerland and Lancashire but there was a determination to keep in touch and to meet up from time to time. So far we have met up to celebrate 21, 30 and 40 years after graduation but this year is the big one. On 24 June 2017 we will celebrate 50 years as graduates and we will be using the wonderful facilities at Heaton Mount, University of Bradford, for the whole weekend. 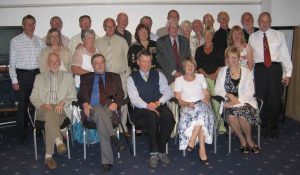 Hi Peter,
I was looking for anyone from the 1966 Chemistry graduation year.
Must admit I cannot recall students from your year apart from one of the females!
Best Wishes for your reunion.
Chris Johnson, N.Wales