With a background of volunteering in Rwanda and Thailand, a First Class Degree in Development and Peace Studies and two internships (in Uganda and Oxford, respectively), I thought I was set to soar on graduating in July 2013. Less than six months after graduating, I returned to Bradford to complete an internship at the Students’ Union designed by the University to support unemployed graduates. After a particularly nasty breakup and big dreams of moving on, I did not anticipate such a swift return to Bradford City.

With the ‘Sound of the Peace’ Team at Intramural 2014

In retrospect, moving ‘back’ wasn’t failure. I reconnected with old friends, had a paid internship with great responsibility in the Volunteering department (working with ‘Malma’ for those who are familiar with the Union), manned by the wonderful Ros Coulton, and enjoyed support from the Careers Department; all in a city I was familiar with and was really able to enjoy, second time around.

By the end of my internship with the University of Bradford Students’ Union, I had a two year job offer with Advocates Coalition for Development and Environment (ACODE) to work as a Programme Assistant in Kampala, Uganda, to support the implementation of their peace and democracy programs. For two years now I have had the privilege of working for ACODE, providing technical support to four projects addressing governance, peace, and security issues in the East and Horn of Africa, as well as contributing articles to national newspapers on public policy issues.

The ACODE Staff at a team-building workshop in 2014

With a Colleague from ACODE at a CEAP (Community Engagement Action Plan) workshop in Anaka sub-county, Amuru District – Uganda during 2015

Two particular highlights have been the fieldwork opportunities and attending two Regional Security Round-Tables. During 2015 I supported Local Government Council Score-Card Initiative (LGCSCI) district dissemination and inception workshops over six weeks and travelled to 16 districts to report during community meetings at the sub-county and village level. LGCSCI is a social accountability initiative that seeks to deepen local governance by strengthening political accountability of elected local leaders and citizens’ demand for excellence in the provision of service delivery by their local governments.

I was also fortunate to attend two Regional Security Round-tables in Rwanda (2014) and then Kenya (2015). Since 2012, ACODE has organised Regional Security Roundtables in the East and Horn of Africa with security experts (civilian, academic, and military) convening to discuss predetermined topics including food security, regional integration, terrorism, and the proliferation of small arms and light weapons. The overall objective is to promote regional peace and security by deepening the understanding of the role of the military and other security institutions in the evolving peace and security architecture in the East and Horn of Africa. 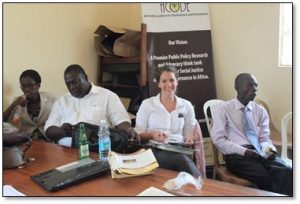 In Luwero with the District Based LGCSCI Research Team during 2014

After the Round-table in Kenya, my article – ‘Does East Africa appreciate the possibility of pragmatic peace?’ – was published in Ugandan media outlets and on the University of Bradford’s JEFCAS (John and Elnora Ferguson Centre for African Studies) blog. Reconnecting with Bradford colleagues is always a plus and ACODE partnered with the University of Bradford for the 40th Anniversary Africa Regional Conference which welcomed Professor Kenneth Omeje and Dr David Harris to Kampala, alongside the Alumni network here. In April 2016, I was also fortunate enough to meet with Dr Andrew Carruthers for an informal alumni drinks gathering in Kampala to celebrate the 50th Anniversary of the University of Bradford.

The delegation at the University of Bradford for 40th anniversary Africa Regional Conference in Kampala – Uganda, 2014

Bradford the city and Bradford the University may not have always enjoyed the reputation they deserve but the degree, contacts, and internship opportunities I received through the University definitely got me to where I am today.

In my next post, I’ll delve into more detail on living and working aboard to discuss; ‘The Big Challenges and the Average Week’. For those who would like advice or guidance on finding graduate work in the development sector, I’m available via LinkedIn for support.

Emma graduated from the University of Bradford in July 2013 and went on to complete an internship with the Student Union in January the following year. In May, 2014, she took up a posting in Kampala – Uganda to work as a Programme Assistant with Advocates Coalition for Development and Environment (ACODE). Since then, Emma has worked to support the peace and democracy programmes run by ACODE on national governance, regional peace and security, and public policy issues.  Find her on LinkedIn.

Great strides in few years. It takes a mind to like yours think, courage to implement thought, persistence to succeed in work. I have observed all those in you, Emma Jones. So far, you have been successful I would judge, for your choices are consistent with the ethos of responsible and productive living. Yet your journey to the top has just started: imagine yourself 25 years from now. Friends are supporting you, in whichever way they may contribute, and will always be. All you need do is “Keep the Fire Burning.”

thanks for your support and hard work