To help celebrate the first South Asian Heritage Month which ran from 18th July – 17th August 2020, alumnus Atif Saddiq has written a piece about the diversity of language within Pakistan.

Atif Saddiq graduated with a MPharm degree in 2014 and is currently enrolled on the Advanced Clinical Practitioner course. To find out more about his career and study at the University, please check out his alumni profile here.

Since I could write a book on areas such as growing up as a British Pakistani; family background; my upbringing; and what it means to have a dual nationality, I won’t dive into these realms but instead will keep it topical, and will talk about a specific area – language!

Pakistan (and more specifically Azad Kashmir) is where both of my parents were born. According to the reliable and trustworthy Wikipedia database, a total of 74 languages are spoken in Pakistan; of these, Punjabi, Pashto, Sindhi, Saraiki and Urdu are recognised as the key languages, with the remaining 69 consisting of regional/provincial variations of the above.

Surprisingly (or unsurprisingly – depending on what you think of my speaking skills), English was not my first language. Although I was born and bred in Halifax, I did not speak English until I started at nursery. My mother tongue is Pahari-Pothwari (also known as Mirupri amongst the British Pakistani community) and this is a regional variation of Punjabi, with hints of Urdu and the occasional English word thrown in. Unlike Urdu (Pakistan’s national language), Pahari-Pothwari/Mirpuri is a spoken language only; for this reason, in my ancestral district of Mirpur, the chosen language for schools is Urdu. So as you can imagine, Pahari-Pothwari/Mirpuri is the equivalent of northern-English slang, whereas Urdu is like the more, posh/Queen’s English. Although Punjabi is often regarded as informal, rough and ragged compared to Urdu, Pahari-Pothwari/Mirpuri is usually seen as a notch rougher (and more flavoursome in my opinion).

In the UK, there are certain hotspots where you can find Pahari-Pothwari/Mirpuri speakers, and these are usually in/around mill towns and cities. The reason for this is because Mirpuris started settling down in Britain in the 1940s, transferring their workmanship on British merchant navy ships to the industrial needs of the growing British economy. Their migration accelerated after the construction of the Mangla Dam in 1966, which submerged vast areas of farmland in the Mirpur district.

For those of you who don’t speak Urdu or Punjabi, just so you know, people that are able to speak Urdu fluently are not necessarily as fluent with the Punjabi language, and vice versa; to be fair, a similar rule applies for being able to transfer between different dialects of Punjabi in itself, since certain words based on regional variations can mean something completely different. A funny example would be my wife – her ancestors are from Faisalabad and her family’s version of Punjabi is very different to mine. You can imagine how shocked my family would have been when my wife (a newlywed at the time) publicly complained of backache by suggesting that her ‘tui’ (pronounced too-ee) hurt – in the Pahari-Pothwari/Mirpuri version of Punjabi, her phrase at the time translated to something along the lines of ‘my bum is burning!’

So anyway, I hope you enjoyed my little piece on language, and now you know that not only is my UK-based geographical origin regarded as up-North/common, the same applies for my ancestral background…..and you know what, I love being able to speak as a commoner in two different languages.

See below image of me on my high horse speaking Urdu (not really…was probably shouting in Punjabi because I was terrified) on wedding day 11,203 (since Pakistani weddings last forever). 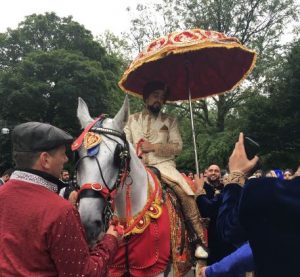 Atif Saddiq riding a horse on his wedding day.