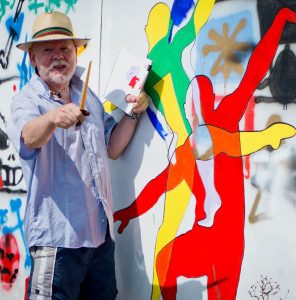 I arrived in Bradford to begin my first year as a chemical engineering student in 1968 and stayed until 1975 when I graduated with a Ph. D. It was during my first year that I spotted a small advert on the Students Union notice board; a group of management students were going to organise the first Bradford arts festival and they were looking volunteers. As I had an interest in art I was enlisted as the exhibitions secretary for the festival and this led to an exciting and growing time in my life. Through working for the festival I spent some time with David Hockney and Lindsey Kemp, both great influences on me. I met and had a relationship for several years with Diane Bates who had just started work as a lecturer at Bradford college of art and through Diane I effectively became an honorary student of the art college becoming involved with many of their projects. I must admit I put more effort into these exciting extra curricular than I did into my course work.

The chemical engineering course at Bradford was educationally ahead of it’s time in many ways and sent all its students to Europe to learn a language so just after the Festival ended I was sent off to Germany for 6 months, yet another shock to the system of a naive boy from Blackburn. Because of the way I dressed (outrageously hippy) I stood out a bit at Bradford and it became a bit of a fad for a while to throw me into various bodies of water notably the University reactor pond and Lister Park lake.

It’s all a very long time ago now but I fondly remember our course tutor Roger Bourne, a very caring man who entertained us with self-penned, funny folk songs and Prof. Bill Wilkinson who was my Ph. D. supervisor and helped me to believe I had something to contribute to the world of science. I left Bradford in 1975 to start research work at a government research station in Stevenage and then worked as a project manager for an adhesives company for most of my career. Throughout my working life I also maintained a strong interest in art and creative pursuits, in particular contemporary dance as a performer on stage and at festivals and as a ceramicist and when I retired in 2005 aged 55 I decided it was time to follow my long term dream and return to university to pursue a degree in fine art.

It quickly became apparent from the feedback I received from both tutors and fellow students that I was a talented painter. I quickly discovered I have a unique vision of the world which I convey through my paintings. My aim has always been to create beautiful images by use of colour and form to bringing out the underlying patterns inherent in my compositions and which leave the viewer with a feeling of visual satisfaction and pleasure. I strip subjects down to the bare essentials needed to capture the beauty I see in what could otherwise be banal, everyday images. The humdrum is elevated to the extraordinary – the extraordinary into a world in which the viewer wants to be a part.

All of which has led to my first central London solo exhibition “The Journey So Far…It’s All About Me” which will showcase a wide selection of my work selected from the last 10 years of daily painting. All my obsessions will all be on display; People, Places, Dancers & Scenes from my life; at the Royal Opera Arcade Gallery this October. The show has been described as “Eccentric, unlikely and yet still defiantly reverent of the everyday, this exhibition is Parker’s launch event presenting his outstanding paintings to London’s art lovers.”

None of this would have happened without the introduction to life provided by my time at Bradford.