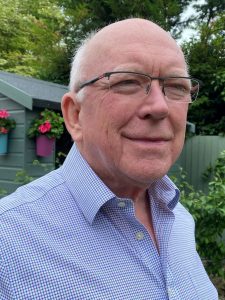 “When I was choosing where to study, I was looking at what the university had to offer, and Bradford was really attractive to me as it was a new facility, a new university, and on a new campus. There was also so much else to Bradford, from access to the Yorkshire Dales, the industrial heritage of the area – which I have become more interested in as I have grown older – and the great restaurants in the city, which meant I left Bradford as a curry lover! I still have withdrawal symptoms from my time at Bradford, and I regularly have to come back to refresh my experience of the place.”

“My experience at Bradford was remarkable – it truly was the start of the rest of my life. Growing up I had a bit of a disrupted childhood. Before coming to Bradford, I had gone through two primary schools and three different secondary schools with my father moving for work, and I had lived in five different parts of the country. With the moving around in my childhood, it was the first time, since the age of 5, that I had joined an educational institution at the same time as the rest of my peers, and without needing to play catch up. It was also the start of being independent, and I could set my own time for working and for going out and enjoying myself. The social side of university was great, living and working with people from all walks of life from all over the UK and abroad. The university offered all sorts of entertainment and I was able to get involved with sports such as swimming and badminton – everything I wanted from university was right there.”

“At Bradford I built self confidence as I was doing the subject that I loved, I found that I was doing well in it and I gained the respect of my peers and felt valued. Previously, people had put me down as someone who would not succeed, but I found that the difference from school to university was stark, and I enjoyed discussing things in depth with academics.”

“While at Bradford I received a scholarship and a salary from Doncaster Rural District Council, so I was reasonably comfortable financially as a student, but it meant that I was working 52 weeks of the year. Looking back though this set me up for being hard-working and ambitious in my career. I worked hard and played hard when time allowed.”
“The biggest difference at Bradford compared to being at school was that I discovered that I studied and worked better under pressure, which I found helped me to focus. The civil and structural engineering course was very demanding and there were a lot of contact hours and additional work. It was hard work – of around 70, I think only half of those continued on to honours degrees, and only around three received a first.”

“After my degree, I went in to my first job with Doncaster Rural District Council who sponsored me at university. During this time, I did my professional exams and became Chartered, and I also did a part-time Masters at Bradford in transportation – so it was hard for me to leave!”

“After my time in Local Government, I moved on to work as a sales engineer for a building products company, working my way up to Structural Development Engineer, and then Corporate Planning Director. That company was sold and I left, but because of the takeover I was able to buy into a manufacturing business of my own. I then moved into property and I spent the last 15 years of my working life providing and managing student accommodation for Birmingham University students. Bradford gave me the work ethic and skills that put me on track for my career, and I always found that I was happiest when working. Without any doubt that is the case, and that is why I am so indebted to Bradford.”

“My time at university fuelled and set the course for my future career, and I honestly believe that I would not have had as happy, rewarding, or successful life and career without Bradford. Bradford gave me so much, and that is why I have decided to give back and support Bradford today. When I studied at university for me it was free – even without the extra support I received. We received a grant, parents were means tested, so everyone was on a level playing field. These days it is much harder for students. They will leave with debts which can put many people off attending in the first place. There are people now who would really benefit from an education at Bradford, but either feel like they are unable to come to university or can’t afford to.”

“That is why I have chosen to donate, as well as leave a gift in my will. I want to make sure that my support and my legacy helps, that it really means something, and makes a difference to someone. I want them to achieve something that they would otherwise have been unable to achieve. I would say to my generation of Bradford graduates, , you were given the opportunity to succeed so if you want to do something for somebody, choose to give to Bradford and provide opportunities for others to succeed.”

Many of our students are the first from their family to attend University and come from financially disadvantaged backgrounds. Scholarships are an important source of support and can help these students to overcome financial challenges and fulfil their potential.
To discuss how you can give to our scholarship funds please contact the Development Team on +44 (0)1274 235179 or fundraising@bradford.ac.uk. Or Donate Here