The face of Bradford has been changed overnight by a huge fire, and the destruction of Drummonds Mill in Lumb Lane.

For that great city’s inhabitants, and those of us with fond memories of living there, the giant mills are the iconic landmarks which distinguish the former wool capital of Britain; but the mills should not be over-romanticised.

On the one hand they created great wealth and prosperity, and the grand though sadly faded city centre owes its existence to the woollen goods they produced.

On the other hand, their working conditions were appalling, and in a classic work of 19th-century investigative journalism, the accommodation around them was described thus: “In the lanes, alleys, and courts lie filth and débris in heaps; the houses are ruinous, dirty, and miserable.” (Friedrich Engels, Condition of the Working Class in England, 1845).

Even in the 1960s, when I spent three years there as a university student, the city centre and inner suburbs were often clouded with pollution from scores of mill chimneys. Looking down from one of the surrounding hills, I remember a view resembling a huge bowl of soup.

Thank God, all that is long gone, the beautiful Yorkshire stone buildings have been restored from their blackened appearance to their original lovely honey colour, and the population can breathe again.

Yes, this is a sad day for Bradford; but perhaps not too many tears ought to be shed over the dramatic disappearance of a monument to the exploitation and cruelty of 19th century capitalism.

Last October I visited Bradford University on the 50th anniversary of my ‘freshers’ week’, with about 20 of my former fellow students. We were shown a vivacious institution looking not backwards in nostalgia but forwards in hope and ambition.

I strongly suspect that is where the seeds of the future rebirth of the city lie, rather than in the empty words of Westminster politicians about some mysterious and undefined ‘northern powerhouse’. 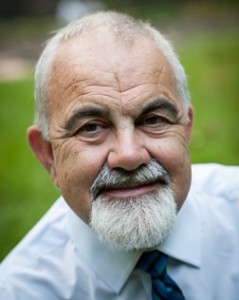 Albert studied French and Russian at the University of Bradford from 1965 to 1969. After graduating from the BA Modern Languages programme he was immediately accepted for the Reuters Graduate Training Programme and thus began a career in international journalism. Albert is now a writer and actor and has written a few novels. Read his full alumnus profile.

Blog cover photo courtesy of the Telegraph and Argus (2016)