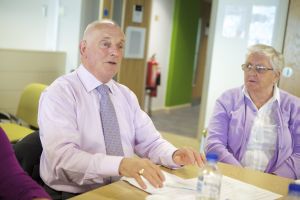 Last week I interviewed a gentleman living with dementia and really shocked myself by bursting in to tears after the interview.

Trevor Jarvis was diagnosed with vascular dementia in 2001 and interviewing him was quite possibly the best interview I’ve ever done; including all the rich and famous people who have walked in and out of the University of Bradford during the years I’ve worked here.

He is committed to informing people about what it is like to live with dementia so that the next generation of professional’s working in the field have a greater understanding of the people they will care for. He speaks at Alzheimer’s Society national conferences on younger people with dementia, and is an active member of the Royal College of Psychiatrists Consumer Group.

I was completely taken aback by his willingness to discuss what it was like for him and we witnessed first-hand what it was like when you interrupted his thought processes and how his short-term memory can affect the simplest of tasks.

The interview once again confirmed in my mind the amazing work that Bradford Dementia Group at the University of Bradford does and once again made me incredibly proud to work for an institution which has such an impact on society.