Friday night saw four different countries’ Olympic teams represented at the University for a dinner to wish them well before they head off to the London 2012 Olympics. Boxers, swimmers and gymnastics came, together with their coaches from Nigeria, Tanzania, India and Vietnam, to celebrate their time spent in Bradford over the last 4 weeks with stakeholders of the city and beyond.

Our own student Saira Tabasum, returned to campus complete with her Olympic torch which excited everyone at the dinner, who just couldn’t wait to get their hands on it.

Now, I’m used to working with photographers to set up photographs. But this one by far was one of the most difficult ones I’ve dealt with. Blink… And the torch is gone! I thought we were never going to get the picture we wanted! I spent most of the pre-dinner drinks reception negotiating and promising to return the torch to an athlete, team doctor or coach once the picture with Saira and the competitors had been taken.

Running from team to team, having the torch whipped out of my hands and wishing I’d not put 4″ heels on led to a rather stressful but amusing time! I just didn’t want to upset the Olympic teams but I had only a small amount of time to get this picture sorted before dinner was served! 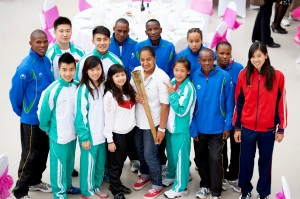 Thankfully we got there in the end!  Never underestimate the power of the torch!