The University of Bradford has had a presence at UK Dementia Congress for many years now and although we work closely with people living with dementia and their families, this was the first year one of our Experts by Experience (Michael) worked with us to run our stand and represent the Centre for Applied Dementia studies.  We were also extremely fortunate to have one of my fellow MSc students, Carla Rogers with us throughout Wednesday and Thursday of the conference; Carla as a great asset to our team and gave great insight to people making enquiries about the course. 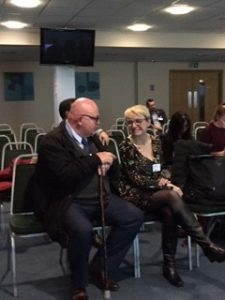 As Experts by Experience Lead, I wanted to make Michael’s time at Congress as enjoyable and fulfilling as possible.  Michael lives with Posterior Cortical Atrophy Dementia (PCA), a rare form of dementia that affects his vision and perception.  Although I’d given Michael the opportunity to make his own way to Doncaster if he wanted to, he’d explained that he felt this would be problematic for him so I offered to go back to Bradford and meet him once I’d set up our stand at the race course.  We then attended the Pathways young onset dementia support group, which I facilitate before travelling to Doncaster to a hotel where we stayed, just a stone’s throw from Doncaster Racecourse. 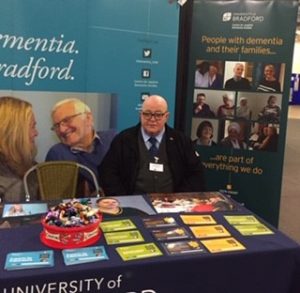 Michael Andrews in the CADS stand

‘ I was asked if I could do a presentation on my experience from Journeying through dementia, at the 14th UK Dementia Congress at Doncaster Racecourse on Thursday 7th November. I jumped at the chance but then got nervous when I was asked if I could make my own way by train from Bradford to Leeds, then change at Leeds for Doncaster, and catch a taxi from the train station at Doncaster to the racecourse. I found that this was going to take me out of my comfort zone, and I knew from past experience that I would start to get confused. When I explained this, I was told that they would not want to give me a bad experience, and the arrangement was to go with Clare from Bradford university on Tuesday 5th November after my Pathways meeting, and stay in a hotel for two nights. I could go to the Congress on Wednesday and then back again on Thursday to do the preparation.

I found the hotel excellent apart from one thing, which I have found that most hotels are the same, and that is the bath and shower – they never have anti slip mats in the bath and no hand rails to hold onto when you’re getting into the bath to have a shower. Why don’t they just put a shower in and do away with the bath? But I did like the fact that they give me a ground floor so no stairs to worry about.

When we arrived at the Congress on Wednesday, to Clare’s dismay part of the university’s stand had collapsed*. I found that was getting involved in putting it back up, which I was back in my element working out how to repair it. There was a helpful man from another stand also trying to fix it and he was struggling with a rod at the top of the stand. I found that this was my field from when I drove lorries; you had to have knowledge on repairing things. I asked was the rod made of plastic or metal; I knew if it’s plastic and you try to bend it there is a chance that it will snap. But it was metal, so I took over and knew if I put one end in the hole and bend the rod in the middle I could force the other end of the rod into the other hole.

I was introduced to a student called Carla, and found her really easy to talk to and, bless her, she worked hard. She was working on the stand and also trying to take in talks on subjects that she was studying. I take my hat off to her, I don’t know where she got all the energy from. Then I would go outside for a quick vape and found that one of the men on security at the front door was ex-army and it was lets pull up a sand bag and talk. The term pull up a sand bag it means let’s talk about the good old times and bring back old memories. 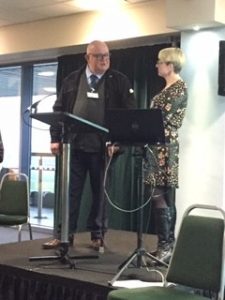 Michael Andrews and Clare Mason presenting the Journeying through dementia

Thursday the day for getting up and talking and I was nervous. The talk was later; I think it was almost the last thing that day. Carla asked me if I wanted to join her for some of the talks she was interested in and I joined her as it gives me a rough insight into what’s happening and what changes are in the future for dementia and also what research is needed.  We went to a talk about How can we support people living with, and affected by, rare dementia? and because I was diagnosed with a rare form of dementia posterior cortical atrophy I was interested in this. Then when they called the speakers up to give the talk I realised I knew them from UCL London – Emma Harding and Emilie Brotherhood – I’d worked with them on research into balance, eyesight and music with PCA dementia. When the talk was over they asked if anyone had any questions and my hand was straight up. Then it was the talk from Vasileios from Bradford University – it was the Angela project. Carla, she’s listening to the talks and trying to write down what is being said. Then I went to another talk with Vasileios on Arts and music with dementia, then when that was almost over it was a mad dash to find the room for the talk with Clare.  The nerves had come back and I found that, to talk, you had to get up on a platform that was hard for me to see, as it was the same colour as the floor. I was thinking please don’t fall getting onto the platform or getting off it. When it was my time to talk my mind was going blank, but I think I got through it.’

Carla Rogers, student in the MSc Advanced Dementia Studies, also shares her experience at the Congress.

‘I attended the UK Dementia Congress on behalf of the University of Bradford. Although a last minute opportunity I jumped at the offer of being able to attend the congress having already developed a keen interest in furthering my knowledge of Dementia Research. Although initially completely out of my depth (I had no idea about explaining post graduate studies to potential students), I quickly settled into the environment and within the team.

The University of Bradford team were warm and inviting. I really enjoyed being able to discuss research with a PhD student, as well as further discuss my own masters with someone else further ahead on the same course. Meeting Michael the ‘expert by experience’ was also a fantastic opportunity. Michael was so welcoming to me and happy to explore my understanding of really how it feels to live with Dementia today, giving me an invaluable insight that I hope really improves my everyday practise.

Several years ago when I began specialising into Dementia care at work I read several books and research pieces to gain insight. Attending the congress and seeing people such as Wendy Mitchell who had actually written these books was inspiring (I was a complete fan girl). Sessions were held by people who live with Dementia and these were so optimistic and enlightening. It was a very humbling to experience the sheer enthusiasm these people have for life and the ingenuity of their creative methods to remain independent.

The Congress ended up being so much more than I had anticipated. I expected a sea of lectures from fancy specialists who didn’t actually understand the impact their research has on people day to day. What I actually got was thought provoking sessions, involving people living with Dementia and their family; an open floor to ask questions and no one feeling that their thoughts and feelings were inappropriate or unwanted. I left this congress feeling so empowered to go back to work and try to make a difference. I genuinely can’t express my gratitude to the University of Bradford and Michael for allowing me to be a part of such a special few days. Thank you.’

*Thanks to Michael, we now have a newly mended stand – we’re so glad he was with us to lead the way on putting it back together.  Great team effort!