Heteronormativity (Warner, 1991) is a concept that was developed from within the overlapping fields of feminist theory, gender, and queer studies. It attempts to describe the way that ideas about what it means to live a ‘normal’ family life relate to different levels of social privilege and inequality. This pertains to the image of family portrayed in mainstream media and entertainment (what does the family that we see in adverts, television drama, and film look like?); in policy (what kinds of family units are rewarded in policy terms by things like, for example, the married couple tax allowance?); and through everyday interactions (what kinds of things do people assume in everyday conversation and interaction?).

The version of family that is privileged through these mediums is heavily constructed around heterosexual relationships. This means that people identifying as other than heterosexual tend to be under-represented, misrepresented, and socially disadvantaged on multiple levels. Importantly, it is not heterosexuality per se that is privileged, but a narrow version of heterosexual family life based around certain ideas related to gender (i.e. ‘men do this’ ‘women do this’) and a family which: is mono-racial (usually white); is middle-class (or aspiring); includes biological children; and is physically and mentally ‘healthy’. 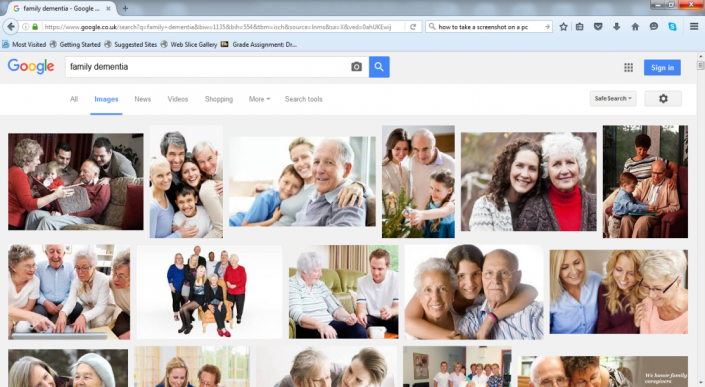 How is this relevant to a consideration of dementia?

As rates of diagnosis rise and awareness related to dementia increases in the public domain, so do representations of those living with a diagnosis. These portrayals in television drama and feature film tend to feature a white man or woman living in a traditional heterosexual nuclear family situation. This dynamic is reproduced in public awareness campaigns and news coverage about the condition. Search the term ‘dementia family’ on google images and think about what turns up on the first page of results. Dementia does not discriminate according to ethnicity, sexuality, living situation or social class yet these dominant representations converge to suggest otherwise.

There is an erasure of experience here which has also, to a large extent, been perpetuated by dementia research whereby there is a tendency for the category of dementia to be treated as unmarked by social location (as though things like gender, ethnicity, class, and sexual orientation don’t matter in this context). But an expanding body of work tells us that people experience things like access to services differently depending on some of these markers – what about single people? People who have never had children? People living in extended family situations? People living in non-heterosexual relationships or who identify as lesbian, gay, bisexual, transgender or queer? What might the psychic impact be for someone who never sees anyone ‘like them’ represented in information about dementia or representations of it? These are important questions that the concept of heteronormativity might help us begin to unpack.

Sources which may be of interest

Westwood, S. (2014). ‘Dementia, women, and sexuality: How the intersection of ageing, gender and sexuality magnify dementia concerns among lesbian and bisexual women’. Dementia. 0(0). 1-21.