As a part time PhD student I arrived a day early from the start of the main conference to attend the ‘Emerging Researchers in Ageing (ERA)’ conference which opened on Tuesday 3rd July 2018. The ERA network provides opportunities for learning, support and networking with researchers and practitioners that are in a similar place in their research careers. The ERA kicked off with a session that provided some ‘top tips’ on how to make our research accessible through engagement of the public in setting research questions, research design and research dissemination.  The sessions were co-hosted by Steve Huxton from ‘Ageing Well in Wales’ and Dr Claire Garabedian from the University of Worcester.  Claire was keen to emphasise the importance of being able to concisely communicate your research to your audience and day two of the ERA gave a platform for members to do just that as a number of them presented their research in a 3 minute ‘elevator pitch’!

Attending the ERA was inspiring, fun and importantly equipped me with several practical ideas of how to design, conduct and disseminate relevant and inclusive research.

So onto the start of the main conference on Wednesday afternoon… and the sun was still shining!

Manchester was the first city to acquire World Health Organisation (WHO) ‘age friendly’ status. The welcome ceremony and plenary of the conference on Wednesday afternoon discussed some of the initiatives in the city that make it a good place to grow old. I was proud to witness Prof. Murna Downs receive The British Society for Gerontology 2018 outstanding contribution to the field award. 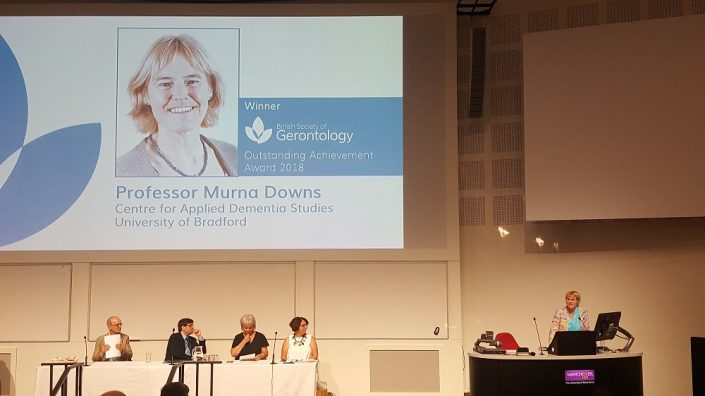 The afternoon continued with a fascinating presentation by Professor James Nazroo. James highlighted how wellbeing in later life is driven by socio economic stratification, as he discussed ‘post retirement capitals’ that retired people draw upon, and why inequalities in later life is a priority area for research and policy.

During the course of the conference I attended many thought provoking sessions. I was lucky enough to catch my colleague Claudia Cooper presenting work that informed the New Interventions for independence in Dementia Study (NIDUS) study – please click here

for more information. I also attended a presentation where Kathryn Lord discussed her work on DECIDE

I attend a symposium on Thursday morning entitled ‘Sustainable Care: Theorising well-being in care systems, care workers and family carers chaired by Nora Keating.  The session discussed the research being undertaken as part of The Sustainable Care Research Programme exploring how care arrangements can be made sustainable and deliver ‘wellbeing’ outcomes. This thought provoking symposium discussed the problematic nature of operationalising  ‘wellbeing’, and how this presents challenges to those involved in care systems attempting to deliver wellbeing outcomes.

Thursday afternoon offered a session entitled ‘Homecare provision’, where several researchers presented their work looking at different aspects of delivering care to people in their own homes.  During this session Lhara Mullins discussed the work that she had been doing entitled ‘What’s Love Got to do With It? Relationships in Homecare Provision’ exploring the importance, and challenges, of relationships in home care – a topic I am particular interested in.

Friday afternoon was rounded off with an amazing session entitled ‘Ageing in Prison’ which was an energetic and well-rounded look at the challenges of assessing and meeting the needs of older people who are in prison.  The presentations discussed the increase in the number of prisoners aged over 50 and Sue Tucker opened the session by discussing the nature and extent of social care need for prisoners and how that differed between younger and older people in prison.  Katrina Forsyth and Baber Malik discussed the challenge of identifying cognitive impairment amongst prison populations in England and Wales and the need to develop care pathways to meet their needs.  This session left me feeling passionate that more must be done to meet the needs of older prisoners.

Wendy Andrusjak, another PhD student also in her first year, gives her account of both the ERA conference and main event.

The ‘Emerging Researchers in Ageing (ERA)’ conference was exceptionally valuable to me. I found that you can network with others in the room that are in similar situations to yourself.  As such, peers are free to speak about their own experiences. This freedom meant that I could learn answers to questions to issues I had been considering in my own research, which  I felt werecrucial to start thinking about.  Some of the early researchers were from New Zealand, Australia, America, China and Canada, and they had the opportunity to present their work to the other attendees.  To be able to present you have to submit an abstract roughly 5 months prior to the event.  The researcher also had to devise a poster to present, giving them the opportunity to talk about their project to others who are interested in their research.  It was a great opportunity to hear what stage other PhD students were at in their project.

For the main conference I attended session’s related to my own research interests, and met the researchers running them, who may be extremely valuable in my career. I attended a symposium about sensory impairments in older people, and how it can affect their health and well-being- a topic very similar to my own.  I spoke to those involved in this international study and it has given me ideas on the focus of my research.  The networking opportunities were key and have been subsequently valuable in the weeks following the conference.  In addition I attended a session where 4 PhD students presented their research. They spoke aboutwhat they have learned from their experience, the difficulties they had, and how they would advise other PhD students in the future of how to best overcome these.  Again, another valuable insight into the world of research and how to best approach this 3 year journey I now find myself deeply immersed in.

The conference also held lunch and even organised a meet up in a bar for drinks event, enabling people to connect with others in an informal environment. There was also a relatively formal evening event including a 3 course meal, drinks, and dancing.  It was a great way to again build a network of contacts, people who will probably be in the area of research for a long time.

We thought the BSG and the three hosting Universities did an amazing job of creating an inpsiring and enjoyable conference and we would recommend those interested in the field of gerontology to attend next years conference ‘Resiliance and Living Well in Local Communities’ which is being held in Liverpool on 10 to 12 July 2019.