I am Oladayo Bifarin, a PhD student at the Centre for Applied Dementia Studies, and my PhD is on working carers in China. In this blog post I will describe share my own experience on what I call ‘the process of getting things done in a PhD’ and ‘the power of networking’ in the context of research. I have completed just about 15% of my Doctoral study (I started in June this year). My first main task, after starting my PhD, was to find an institution or researchers in China who would collaborate with us (very simple right?). More and more applied researchers are embracing the idea of ‘cognitive diversity’; where experts from different fields come together to provide holistic solutions to a problem (more heads are better than one). We needed to identify a Chinese Principal Investigator (PI) as my research primarily aims to understand the phenomenon of caring for older people in mainland China. The rapid ageing population, collectivist culture and reduced family units make it crucial to explore the intersection between culture and caring for older people in this society, as it is well established in literature that China will get old before getting rich.

Go and find a collaborator…

I sent out forth and back emails to identified individuals, arranged video calls alongside my main supervisor and we invested the time to network. Regardless, ‘finding a collaborator’ was a massive task with many false starts, and I had to be reassured by my supervisors that what I considered to be a challenge was a ‘normal’ process. During this process, I was invited to attend a masterclass organised by the Centre for Applied Dementia Studies for early researchers like myself, which was facilitated by Prof Ann Kolanowski from Penn State University, USA. Two slides in her presentation resonated with me as she reinforced the power of networking in research. At the end of the event, when Ann asked me what my project was about, she said ‘Oh, I had a Chinese student- I will introduce you to each other’. I intentionally did not let this raise my hopes as my previous experiences had taught me not to raise my expectations.

About three weeks after this exchange with Ann, I got an email from the student Ann spoke about. The student then promised to reach out to some other colleagues and in about 24 hours, someone in China showed interest in collaborating with us, Professor Liu Yu from Shenyang University. I mentioned earlier how this task of find a collaborator could become daunting. Below are a few areas which were consistently tested as I tried to successfully link with a potential collaborator and meet up with other relevant deadlines as well:

Having established the basis of a collaborative partnership with Professor Liu Yu, in the School of Nursing, Shenyang University, I travelled to meet her, alongside my main supervisor Professo 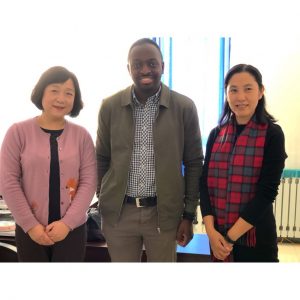 r Jan Oyebode.  It was my first ever trip to Asia, and on the door to door basis, it was the longest journey of my life as it took us about 21 hours each way – all for a three-day visit! We could only afford to visit China very briefly and our aim was mainly to build a relationship with our identified collaborator(s); essentially, to put a personal touch to the official correspondence and to meet the mandate of my PhD funding body- UK Department of Research and Innovation Global Challenges Research Fund (GCRF). On our visit, we hoped to contribute by offering to train students about qualitative research approaches, providing information around older people’s services in the UK and relational research work going on in our Centre. We also talked with nursing practitioners about psycho-social care for older people in long-term care settings. 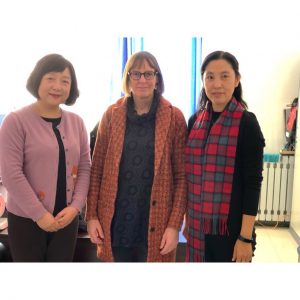 On the day of our arrival, we rested, put the finishing touches to our presentations and had a local meal out with Professor Liu Yu. On the second day, we got picked up by Liu from the hotel. We headed to China Medical University- School of Nursing, where the Dean of the School received us – Professor Li.  She spoke in Mandarin, which was translated by Liu, where she spent an ample time expressing her devotion and the School’s commitment to our project. In general, she was pleased with our presence and very optimistic about future collaboration(s) with the Centre for Applied Dementia Studies. We spent the rest of the day presenting to students and community healthcare professionals (nurses mainly) about dementia care in the UK and about the extensive research work that is being done at the Centre of Applied Dementia studies. The session was anchored by Jan, and was followed by my own presentation about my PhD study to a group of 15 Master’s students. These sessions were evidently well received, as we had series of questions from students after our presentations. 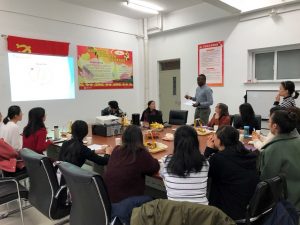 On the third day, jet lag was really kicking in – it was indeed a struggle to keep our eyes open as early as 09.00 am. We started our day by visiting a nursing home. Nursing homes are becoming popular in China, and it was encouraging for us to see the manager and staff of the organisation warmly receive us (You would think we had known one another for a such a long time), as they openly celebrated their achievements and shared their challenges. We had a tour of the nursing home, brainstormed on specific challenges and shared how similar situations are being managed in places like the UK. Issues around the attitude and the culture of managing older people were brought up, confirming to me the significance of my doctoral study. We spent the rest of the day at the University where Jan delivered a lecture on Qualitative Research, followed by a workshop conducted by Jan and I to officially end our visit.

On our last day, which was a Saturday, we visited Shenyang City centre as well as the Forbidden City, giving us some insight into the rich traditional culture of the Chinese people. 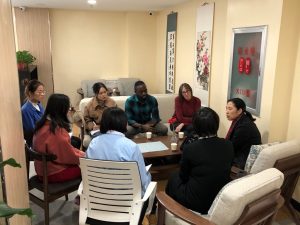 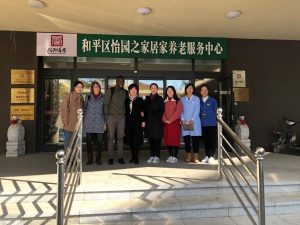 The highlights of the visit:

The trip was the right step in the right direction – I am excited about the future!