When you log on to the Home page of Wendy Mitchell’s blog about her life with young onset dementia, underneath a picture of her smiling, you read:

‘I’m 59 years young, live happily alone in Yorkshire, have 2 daughters and I continued to work full time in the NHS until the end of March 2015, when I chose to take early retirement to enable me to enjoy being me while I’m able.’

Keith Oliver, who received a diagnosis several years ago in his mid-fifties, when he was working as a head teacher, says:

“My whole emphasis is on wellness. While I’m never going to get better, I want to keep well. It is a progressive slope and the long-term outcome is as it is. However, I can live as well as I possibly can for as long as I possibly can.”

These statements are fluently expressed choices by people whose working lives have been disrupted by dementia, to live their lives to the full. They are counter to the more dominant pessimistic tales we are used to hearing about life with dementia. Such determination is not the preserve of people under the age of 65 years but recently it seems that some younger people are using their distinct experiences and their energies to speak out and become a powerful voice for people with dementia.

But like Katherine Ludwin did for her blog, I googled images of ‘person with dementia’. Those pictured include both men and women, with some ethnic variation and a range of emotional expressions. Without exception though, I would judge all to be in at least their late 60s and most to be in their 70s or over.  Those who were younger were invisible. 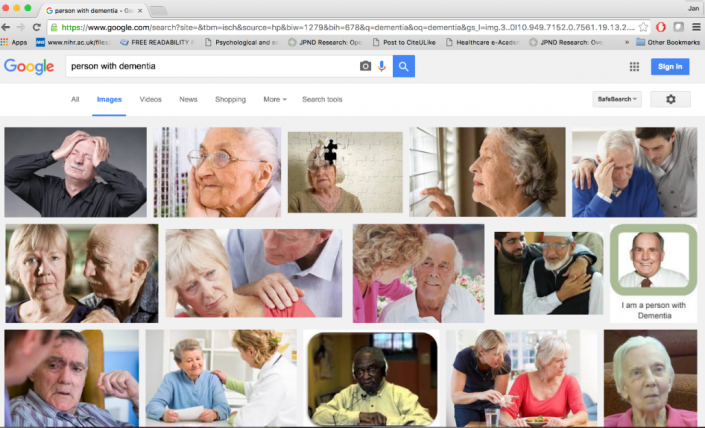 I’ve always felt that dementia services are poor because modern UK society is ageist. It is a curious paradox therefore, that younger people with dementia should be at least, and possibly more, poorly served than those who are older.  I suppose this stems from the fact that only about 2% of people with dementia are under the age of 65 years, making younger people with dementia a minority who may not be recognised and who may be marginalised, often being offered age inappropriate services or no services at all post-diagnosis. The most common age for diagnosis of fronto-temporal dementia (FTD) is in the 50s. When I proposed researching this area, more than one well respected academic told me it was not a good choice of topic as there were not enough people to recruit into good studies. Despite this I currently have a feeling of cautious optimism that we may be on the brink of changes for the better.  I can relate this to a couple of recent developments.

A couple of Saturdays ago, I travelled to London to take part in an event organised by Jill Walton and colleagues under the auspices of Rare Dementia Support. The day was for families affected by genetic forms of FTD and Alzheimer’s disease, which often have their onset at younger ages. Those attending included some living with dementia and some carrying a gene that meant they were almost certain to develop dementia, as well as other family members. A number of health professionals and academics presented information and made themselves available to engage in discussion, and a young woman whose mother has young onset dementia, and who herself has had a positive genetic test, spoke about her experiences.  Life wasn’t easy for those who attended, but the honest, open dialogue and the commitment of the professionals give cause for hope.

I have also been organising a teleconference to take place on Monday next, of those of us in the ‘research strand’ of the National Young Onset Dementia Network steering group. This group was set up by Tessa Gutteridge, the Director of YoungDementia UK and launched in December 2014. Our purpose and aim is to ‘Improve the lives of people with young onset dementia and their families by harnessing passion, energy, experience and knowledge.’ The range of expertise and perspectives in the group is enabling us to come up with plans and actions that will make a difference, for example ensuring that the standards in the Memory Services National Accreditation Programme specifically refer to the needs of younger people with dementia. Research-wise, we have agreed that our purpose is ‘to promote and share research and evidence, have an overview of current research and priorities for future research, and support and encourage research with a view to making a difference to the lives of people with young onset dementia and their families.’ Anyone who is researching young onset dementia and who would like to be in touch with us would be very welcome.