The day had arrived. All the hard work and months of planning would come down to this. If yesterday the gallery felt nervous, today there was a palpable sense of excitement.

The projector and screen had been delivered, and so had a huge stack of chairs ready for the talk later in the day. While these were being assembled and tested, Caroline made her way to the train station to meet Professor Paul Coldwell, ready for his talk.

When they arrived back at the gallery there was a final check to make sure everything was working and in the right place, and Professor Coldwell having a test run of his talk. Once that was done, (and the wine chilling in the fridge) there was nothing to do apart from sit and wait. 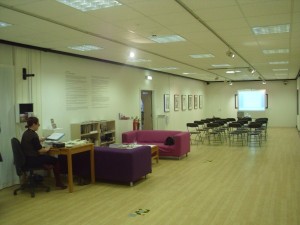 Once 5 ‘o clock came, visitors started to pour through the doors of Chesham Building, and into Gallery II. The space quickly filled up, and Professor Coldwell took to the stand at 5:30 ready for his talk. 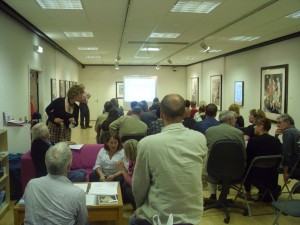 There was the familiar clink of wine glasses being put onto the floor as the attention of the whole room was fixed forward on the speaker, and as the lights went out, the Professor began to mesmerize with his acute in depth knowledge of Paula Rego, pandora charms australia accrued over a number of years during his working relationship with her.

He gave an insight into the way she works and the processes she uses, but also how he came to work with her, and the marathon printing sessions they used to have at his house on a weekend, away from the rest of the art world.

The sheer amount of knowledge Professor Coldwell has on the subject of printmaking and Paula Rego is incredible, and because of his enthusiasm for the subject, was in danger of running over time, so had to wrap up his talk to enable the rest of the evening to run smoothly.

Greeted by a rapturous set of applause, and a genuine appreciation for him sharing his knowledge, Professor Coldwell then spent the rest of the night mingling with the dispersed crowd in the gallery and café, to discuss anything that the visitors wanted to ask him about printmaking, his pandora charms sale own work, or Paula Rego. 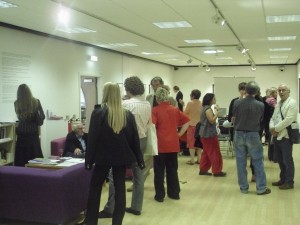 Aside from Professor Coldwell, artists Marina de Stacpoole and Cyril Mount travelled up from London and Brighton respectively to see the talk and new exhibition, in preparation for Cyril’s upcoming show at Gallery II to coincide with the Peace Jam later this year, and the continuation of Marina’s ‘Gifts’ exhibition at Pop Up Gallery in Centenary Square.

Throughout the night copies of Professor Coldwell’s new book ‘Printmaking: A Contemporary Perspective’ were also being sold at a discounted price (and still are, with very few remaining) with the Professor even doing a book signing session to show his appreciation for those who bought it. Also on sale were a number of books on Paula Rego, ranging from previous exhibition catalogues to in depth studies of her working practice.

Books bought, conversations had, and drinks drunk, the visitors began to slowly make their cheap pandora charms way home into the setting sun of Bradford. A great way to start the new season of exhibitions.