Ok, so I was talking about our role as Jester to the University of Bradford and here is a good example.  Following conversations with Peter Hopkinson and his Ecoversity team, we were commissioned to create a piece of re-active theatre for the Sustainable Universities Conference 2010 held here last week. I was delighted to be able to work with a great creative team: performers Matt Rogers, Ellie Harrison and Natalie Bellingham alongside my regular creative partners The Guvnor on the audio side and Ivan Mack the Arts on Campus Technician – my regular lighting designer who on this occasion pushed the various buttons in the absence of lighting.

We spent the first day on the conference (and a rather lovely evening meal) interviewing attendees and soaking in the fascinating key note speeches and workshops.  We then worked overnight to create a piece of performance ( our reflections on the first day) which was shown at 10 am on day two.  Rather bleary eyed we were when it came to perform…… the next section is some of what we came up with: 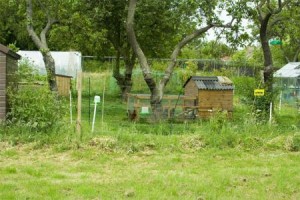 “The thing that grasped me most from yesterday  is the image, the idea, of the allotment.  I can picture it clearly.  I have a very precise image of what it looks like and I have that because that word, that idea, that ideal speaks to me.

I guess it would speak to a lot of people gathered in Norcroft as well. If I were to ask you to close your eyes and think for a brief moment about an allotment, to picture it, to fill in, swiftly, without too much thought or effort on your part – I am aware that we were mostly up a bit later than we intended last night – I would put a fair amount of money on the table that you would, by now, have a fairly rich image.  You would have detail. Specific detail, colour, shape…  Your picture would be filled with specifics.  And it would be yours, not mine.  But it would still fill the intellectual, emotional space we assign to the word ‘allotment’.  I would recognise it. We have a common, if ill defined, idea that we can all subscribe to, I would suggest.

My idea, ideal, I suppose, of ‘allotment’ is tied into my childhood, my father and grandfather. These were deeply practical men.  My father, a master mariner, my grandfather, a wheelwright amongst many other professions – these were men who could and did improvise, make what they could with what they had to hand.  So my allotment is filled with bodge and fix, the bricolage that Peter talked about yesterday morning.  The random object that has been re-used, re-fashioned, changed in meaning and purpose by being used as a planter, the 7 doors that become a shed, or in my grandfathers case the Anderson shelter that had become a garden tool store – about as great a change of use, of meaning, of resonance as I can imagine 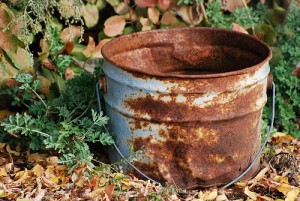 There is for me a power in this, a meaning beyond the simple fact of growing fruit and vegetables.  I have a, I was going to say horror but it is not that…exactly, of the B&Q garden, the off the peg ‘solution’ to all your gardening needs – and maybe there is a kind of inverted snobbery in this – but that to me seems to defeat the point, it smacks to me of faddism, a phase ‘we’re going through’ rather than something that has been turned over in hands, looked at, pondered on, re-thought and re-used.  It seems to me that this time, this contemplation, this act of improvisation or transformation is every bit as meaningful as the process of planting and growing, no….that is not quite right: it is in many ways the same thing at heart.  It is what separates the cottage from the factory, the artisan from the mass-produced, what is sustainable from consumption culture.

Allotments are also and this, for me, is a connected point – places of conversation, of shared tips, shared experiences, common purpose, places where experience is valued and knowledge recycled – where ‘failure’ is a random yet constant possibility that can be used and learned from season to season, year to year and yet have to be adapted, considered in terms of the particularities of aspect, shade, proximity of water source.  A thousand variables that must be considered in a dynamic, changing situation that will not wait on us as nights fall and suns rise, season upon season. If we were to think about it too hard the sheer complications would boggle us but they don’t, do they? Because growing things is easy is it not?  This endlessly wondrous miracle has been made easy by contemplation, shared knowledge and experience.

So why, then, is it, or maybe I should say can it be then so difficult for us to find the time to eat with each other?  If we can make the wondrous things easy why do we make the easy things hard, put barriers in the way? As Christine will attest developing an understanding that shared picnics were a worthwhile, meaningful, activity in the workplace was not easy.  Such a simple thing.  A thing that allows us space to share conversation, tips, experiences, common purpose.  A ‘green space’, or is that too fluffy? 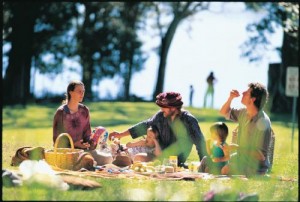 Maybe we find this so hard because it is the nature of institutional working that we build walls around ourselves and call it professionalism, this acts as self protector, as a shared masonry, a nod, a wink, a funny hand-shake that signals to each other that we are inside the walls looking out.   Universities are by their nature word based, we generate more words than I can deal with and it is words, the language of academia, that we shelter behind. This is not to say that that language is not important, in context it is vital.  But maybe, maybe, also limiting when we try to step beyond our walls or operate in ways that lie outside our norms?  Maybe it is our language and the ways of thinking that language engenders that holds us back from the simple pleasures of a shared picnic?

I wonder if we shouldn’t change the ways in which we think by changing the language of our discourse.  Returning to the analogy of the allotment one final time, maybe we should seek to find the bodge and fix, the many languages, the different ways of speaking and thinking lying higgledy piggledy on top of each other, not want the B&Q solutions… and see that allotment ideal as a blessing because it changes the resonance of what we say.

In that spirit, I offer you this:

The soil she tills
tends to hardness,
broken with stones
and glass from an
abandoned greenhouse
that leech through the earth
at a semi constant rate.
It is set on a hillside
below a wood
that sucks the
earth bone dry.

But she will carve,
in this unpromising place,
through tender care
and constant watering,
a garden,
a place of peace
to sit as
evening comes down
and look beyond the house
to green hills. 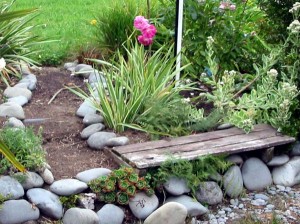 She will fill this garden
with jasmine,
night scented stock
and camomile,
with aromas that brush
warm summer air.

She will watch
children play
with cats,
slo worms,
frogs
and will know
that contentment can be
nurtured from the least
likely of soils

If the above makes the performance seem a bit po-faced it’s only because the bits that weren’t written down (devised by Ellie, Matt and Natalie) were hilarious.  I have been happily re-creating them for friends in pubs around the Saltaire area ever since.  If you find yourself around Shiptaire buy me a beer I may well do so for you.  Which now makes me sound like I’ll dance for beer… Oops!

*Oh and btw Bricolage: Peters definition is french for all the bits and bobs you can put to use in a garden and so, for the day, we were bricolleurs…