Sorry, cr*p band to quote but needs must when the devil drives………… 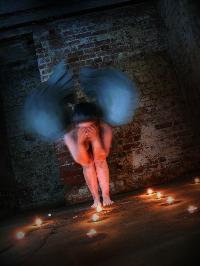 .  She performed her piece ‘When Night Falls’ at TiM on Monday night (11th October 2010) and we were having a smallish debrief about that and then went to give some feedback to the second development stage of Rachel Dean’s ‘Nativity’.

Rita is an amazingly inspirational artist whose work never fails to intrigue, disturb, to challenge and question.  She plays in quite profound ways with the relationship between audience/spectator/artist.  Questions that are absolutely vital to notions of performance in the mutli-media/multi-platform/multi-possibility 21st century.

Lucy Barker, who worked with Rita on ‘When Night Falls’ described it thusly:

“Initially, the participant walks into a darkened room and must surely feel a little disorientated.  They are told to not speak and not leave the room until all the candles are out.  They are given a lighter.  When they leave the room, they enter a third chamber where they realise the previous participant has been watching them on a monitor and has named the piece they were in.  They are invited to observe the next piece and name it, creating a continuous cycle.

In the space, Rita is nude, laid on the floor, with a large pair of metal wings on her shoulders. A grid of tea lights is laid out on the floor.  She pulls herself along the floor to each tea light, blows it out and carefully pushes it aside.”

The questions that Rita is asking about audience/artist relationships and narrative are being explored elsewhere in different ways – companies like Slung Low locally, Chris Goode, Punchdrunk and many more nationally (all with less or more concern for a ‘significant’ platform and nowt wrong with that) are exploring similar ideas in their work – indeed these are questions that have history behind them – Jerzy Grotowski moved into Para-Theatrics after his Teatr Laboritorium in the 70’s, visionary that he was.  But they are absolutely crucial if we want theatre to be alive and offer something unique. Something not televisual, in and of the moment.

As is clear from above Rita’s current practice is exceptionally pared down and challenging – work that explores her own epilepsy and it’s drug control or concepts of guilt – and is often available to very few people (When Night Falls played to 8 people in total at TiM – it was all she could physically sustain). It will not be everyone’s cup of tea quite frankly. It is mine.

Be sure that this work will eventually influence the mainstream:  without Grotowski there is no ‘Lion King’…….

That shouldn’t matter….. but it does.

*We do a huge amount of project work at Theatre in the Mill to ensure that it ‘paying’, here, does not matter as such and that artists can make the work they want to in the way they want to.