Protest: Fight The Power*
curated by Punch Records and Caroline Hick
shown in the University of Bradford Richmond Building Atrium

“People, people we are the same
No we’re not the same
Cause we don’t know the game
What we need is awareness” 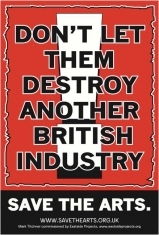 It strikes me that ‘Protest: Fight the Power’ is a perfect distillation of the meaning and purpose of ‘Arts on Campus’ and why, on the University’s founding, arts fellowships were established at a primarily STEM University.  It is the place of education to feed enquiring minds, to stimulate original thinking and encourage fresh perspectives.  So it is with art but with that thinking linked to the emotional, the spiritual… to other resonances. 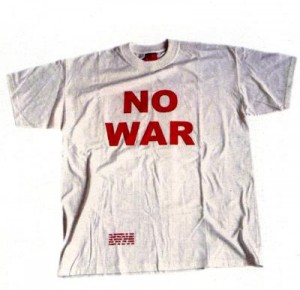 It also strikes me that now, more than ever – as we are bombarded by ever more news channels, ever more e-linked social networks, ever more images with an ever greater world reach – an exhibition that explores the political significance and nuance of the image is of huge value to us all if we are to make informed choices about the world in which we live. As I write this NATO planes are bombing Libyan ground forces, questions are being asked about the media coverage of the 26th March TUC march in central London, radiation leaks in Japan are reported hourly.  The significance of the image and it’s political meaning could not be in starker relief. 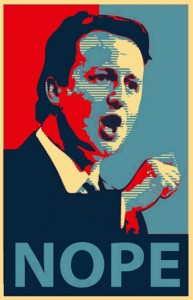 It was hugely interesting to me, therefore, that there were complaints about the exhibition on it’s opening – now let us not get this out of proportion, they were few and outnumbered by the support it received – it was proof to me that, in touching nerves around the politicisation of the image and, further, connecting with an emotional response, the exhibition was doing exactly as it should. That we were pushed into covering some images up and removing one other added, in my opinion, to the power of the whole.  The arguments around censorship versus freedom of expression are meaningful, ongoing and crucial to definitions of who we are and what we want to be as a society.  And by society I mean both the University of Bradford and the wider world in which we live.

The exhibition covers a huge range of political and social material – from election posters to pregnancy advice, advertising to consciousness raising. It invites us by the sheer volume, by the political, social and geographical diversity of its content – whether it be Obama as Batman villain or a pregnant man – to seek the meaning, the message, that lies behind and asks us to consider that all published images are the result of deliberate choice and to in future question what those choices are.