I was asked to speak at the Compass Live Art seminar ‘Nothing Ventured, Nothing Gained’, held at the University of Bradford, on the afternoon of 6th June, about our experience and further plans in regard to international co-production.  We have committed to co-producing a new piece of work by Instant Dissidence, a company we have supported for a number of years now, in partnership with Ivana Ivanovic (a dramaturg from Croatia) and are seeking funding for a big artist visit and festival in Bradford within the next couple of years as part of Corners, an on-going project that links up contemporary makers and arts organisations from the corners (as opposed to the fashionable centres) of the continent. 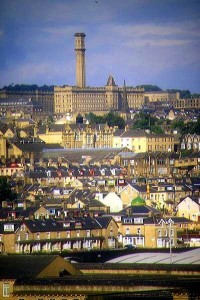 Corners links Poland, Georgia, The Basque Country in Spain, Northern Ireland, Puglia in Italy, Umea in Sweden, Croatia, Slovenia and Yorkshire in England amongst others.  Brilliant artists and organisations that have a different take on the world, on the place and meaning of art and on engagement from the big metropolitan centres, coming together to talk and think and make new work.  That feels very important, right here, right now.

Firstly, it was fascinating to hear the perspective from both Montpellier and Zagreb sitting alongside that of Bradford; but secondly (and I guess the reason I’m writing this) because I had a very rare opportunity to speak in public about why Theatre in the Mill does what it does and a wee bit more about how. I thought that might be worth sharing a bit more widely that that lecture theatre.  I’ve probably been a bit rubbish at that, so here comes a small amount of righting the balance.

A lot of this comes directly out of my own practice as a theatre-maker (which is what I was before I became Artistic Director here and what I will be again) and, I suppose, as a political being.  I made work that was based in communities and that articulated not often heard stories or different sides of big ones as well as in Rep theatres, work that happened on walks and in venues and in schools or community centres.  I also had experience running another venue previously.  A lot of that work left me, not unhappy, but kind of dissatisfied with what venues (with some very honourable exceptions) were like: how they supported the storytellers, whose stories got told, how those stories were told, how they were made and who for.

That dissatisfaction was mostly unclear in my head, just a gnawing worry about relevance.  Now, don’t get me wrong, I don’t think we’ve got things right yet, I do believe, though, that we are on an interesting journey.  It’s  a journey that is constantly fed into by the artists we work with and the audiences we interact with.

It’s  worth stating here, for those of you who don’t know, that Theatre in the Mill is part of a University: a Science (including social science), Technology and Management one (with a pretty unique demographic), we have no performing or fine art courses here.  We are in a serially deprived working class city with a rapidly evolving demographic.  We are in a city with one of the youngest populations in the UK, one defined (to a large extent in the popular imagination) by trans-national/cultural migration.  Bradford is a city with a long history of radicalism both in art – a portion of which can be found here, here and here and in politics. These things have to matter to us.

So what we do is put both people and process at the heart:   We offer artists the space to play, to think, to explore ideas at an early stage through our Open Space programme and our on-going policy of offering up our space if its available.  We offer development commissions for artists to take work to the next stage, we offer up our connections to other venues, to other producers who can distribute it beyond Bradford, we offer up our in-house knowledge.   These artists are, in the main, at some remove from the mainstream. They, in the main, make work that could be described as political with a small p, work that reflects in some way upon the world in which we live and how we live in the wider world. 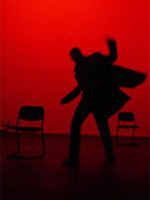 As important to us is the willingness of artists to collaborate, with each other, with us and to see that, in some ways, their audiences are co-authors of the work – theatre doesn’t work unless an audience choose to play along, to engage our imaginations, our emotions, our intellects.

That gnawing worry and the evolution of what we do came together very powerfully to me here, where (when being interviewed by me) the brilliant Chris Goode talks about the possibilities of theatre:

“I’ve never been satisfied with the idea that we come here to escape….. let me say that in a more nuanced way….there is a kind of escapism that theatre does make possible but it’s an escapism out of the weird fictions that we live inside and into a kind of reality. There is something interesting about how we create temporary models to live within, that we can create those spaces which at least allow us to glimpse how else we might live. We all kind of know that we can’t live like this anymore, that – to put it in terms I’m comfortable with – capitalism isn’t working – that we are going to have to think through how else we might do this. We do know these things, we just don’t have a safe space in which to know them.”

We open up processes at each stage to our audiences, invite them as audience members who have a particular take on the work (never having seen it before) that neither the artist or the venue have.  We invite and open up critical discussion about ideas, about what they will carry away emotionally, imaginatively from the piece they have seen and dig into the why’s of that.  After all, if we are talking about societally problematic things we have a responsibility to firstly, talk widely and to ensure that what we are ‘saying’ is what we think we are ‘saying’ and secondly, ensure that we are talking with people not at them, frankly we’ve all had enough of that.  A willingness to do so, brilliant artists, who see that inclusivity as important to their practice – whether it be dance, live art, new writing, devised work – is the closest I can come to a criteria for those with whom we work.

We are by no means the only people thinking in this way.  Our good friend Annabel Turpin, of ARC, Stockton, co-wrote this about very similar thinking.

This thinking runs through our practice as a venue, it can be seen in The Enough Project which opens tonight, in Muslamic Love Story, which will come to fruition in the Autumn. On the 28th/29th June Tongue Tied Theatre are with us with their production of ‘Conversations not Fit For The American Dinner Table’, a piece that has two work in progress showing here at Theatre in the Mill.  It is a piece about how politicians manipulate language, fear and the particularities of the rolling news and the agenda of stations to their own ends.  It is based on the Trayvon Martin case and the ‘Stand Your Ground’ legislation in America but has massive relevance to here, now, massive relevance to a country that has been manipulated, through fear of debt, into acquiescence over the biggest assault on our cultural and social landscape since World War Two.  It is happening here too. 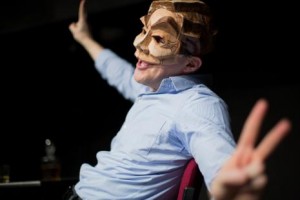 The company have had the opportunity, through the work in progress showings to talk to senior lecturers in Conflict Resolution from our Peace Studies Department, to housewives, to artists, to Bradford kids.  All those viewpoints will find some reflection back in the finished piece.  And that, for me, matters, for a venue in a culturally diverse University, in a serially deprived, young, ethnically diverse, working class city if we are going to create great art for everyone.