I am Iain Bloomfield.  Head of Arts at the University of Bradford and Artistic Director of Theatre in the Mill.  I write a bit – for performance and poetry, direct a bit, have an opinion on most things and am happy to share. 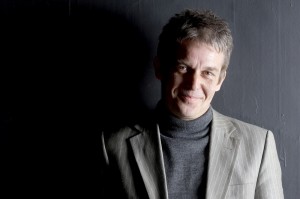 I was born in Singapore in 1961 at the fag end of colonialism and an awful lot of my early experiences were centred around and coloured by that. Street festivals, enormous firework displays, street markets, heat, smells, noise. My father was a captain in the merchant navy and so I also got to see a fair amount of the Far East whilst very young.

We returned to England in 1966 – a grey England, very different to what I was used to – when given my first apple I didn’t know what to do with it as I’d never seen one before. That sense of dislocation, not having a home, has remained with me to this day.

I lived and was educated in North East Essex from 1967 until 1980 when I left to study Drama at Huddersfield Polytechnic (as was). I left there with a lacklustre degree and a real sense of purpose, if a bit ill defined. I think that the absolute bedrock of my beliefs about the communal, trans-formative potential of theatre were established and nurtured by lecturers such as Chris Meredith and Dr. John Hemming. I am, and will always remain, deeply in their debt.

On leaving and after a period working on MSC schemes, I formed in 1985 (along with a number of friends) Proper Job Theatre Companyand worked with the company until 1994. The company, a co-operative, focused on schools and community work and went in my time there from abject poverty to significant national, regional and local funding. They are still operating very successfully, although in a very different incarnation.

Post Proper Job and in search of a new direction and the opportunity to specialise as a director I worked in repertory theatres such as the Swann in Worcester and the Belgrade in Coventry as well as developing a whole range of outdoor, processional, fire performances in Manchester, Oldham and Huddersfield.

I moved to Bradford in 1997 to take up the post of Head of Community, Education and Outreach for Bradford Theatres and worked there until 2001. My role was to develop and run the Alhambra Studio, set-up the education touring company Twisting Yarn and to oversee the Asian Arts Initiative. It was, really, the first time I had run anything of any size on my own and, whilst I think I made some mistakes along the way, I remain very proud of what my team there achieved and developed a real love of the possibilities of creating broad ranging, ongoing, programmes of work rather than one-off projects.

Following another period of freelance work where I directed multi-lingual co-productions for the Contact Theatre, Manchester (Just Before the Rain) and the Coliseum Theatre, Oldham (The Beautiful Violin) I was appointed Fellow in Theatre at the University of Bradford in 2003.

In my time here I have tried to focus on how and why theatre is made, what stories we tell and to whom, explored what theatre buildings mean and have slowly attempted to spread those investigations out throughout this institution and way beyond.  I simply believe in theatre makers, in other artists, I guess.  Appointed Head of Arts in May 2008 I hope that journey continues on a broader front.

I am the father of two daughters Leah and Robyn who was born with Prader-Willi Syndrome and about whom I wrote in The Netherlands. Becoming a father and having a disabled child colours my view on the world significantly and therefore the work I make. In 2006 I suffered a serious mental breakdown and this experience and what it has meant, in every way, to my life is, again, a significant feature in my thinking and my work in very positive ways.

Artistic Statement
We are, I suppose, the sum of our parts and some of my parts are outlined above.  I believe that theatre matters – that the stories we tell and how we mediate them really can change the world in tiny but incremental ways.

I believe that the world we live in needs changing and that the communal activity of both making and watching good theatre helps to remind us of our bonds with and responsibilities to our fellow humans.

I attempt to make work that is full of life, colour, energy, flow but believe that to achieve work of originality, of quality one must expose it to question and debate – not just like it because we’ve made it.  I believe in the centrality of the audience.  I try to avoid making obvious choices, they diminish us.

I believe in opening up our outputs to others. To bring in external ‘curators’ to oversee programmes to create a critical community to resist the commodification of culture.

This is what I do.