Evidence suggests mankind may not have abandoned a fish diet so soon after advent of farming. Coastal pots showed traces of seafood, while inland pots showed freshwater fish remnants.

Humans may have undergone a gradual rather than an abrupt transition from fishing, hunting and gathering to farming, according to a new study of an 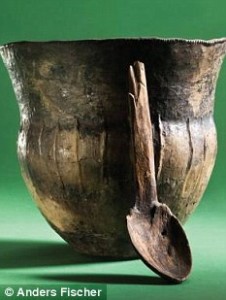 cient pottery. Researchers at the University of York and the University of Bradford analysed cooking residues preserved in 133 ceramic vessels from the Western Baltic regions of Northern Europe to establish whether these residues were from terrestrial, marine or freshwater organisms.

The research led by Oliver Craig (York) and Carl Heron (Bradford) included an international team of  archaeologists from The Heritage Agency of Denmark, The National Museum of Denmark, Moesgård Museum (Denmark), Christian-Albrechts-Universität,  Kiel (Germany) and the Archäologisches Landesmuseum, Schleswig (Germany).

The project team studied ceramic pots from 15 sites dating to around 4,000 BC– the time when the first evidence of domesticated animals and plants was found in the region. The research, which was funded by the Arts and Humanities Research Council, is published online in the latest edition of the Proceedings of the National Academy of Sciences (PNAS).