Avatar has done for 3D what James Cameron did for box office takings over a decade ago. But 3D is nothing new, it has had several revivals since the 1950’s, and has been slowly ticking away in the IMAX world. But is it now here to stay in the cinema?

The film industry has already led the way with moving image technology, well it didn’t have much choice; In the 1950’s the growing threat of television meant that cinemas needed new ways to bring in the masses. With box office takings down, several developments took place – the introduction of surround sound, a move to more colour production and the development of widescreen formats. Before 1953, all films were in a ratio known as “academy” at 1.33:1 or 4×3 – the same as an old style TV set and had a single audio source. The Robe was the first film to take advantage of the new format, shooting in Fox’s CinemaScope at a ratio of 2.55:1 in full colour and with 3-track stereophonic sound (later expanded to five), and the basis for modern surround sound setups.

3D films became common in the 1950’s using polarised glasses – as is used in modern IMAX theatres. Whilst many horror films continued to stick to the simple anaglyph (red and cyan / red and green) glasses, usually where only one or two scenes were in 3D, the polarised system provided the best way to retain the colour in a film print. As today, the problem with the polarised system is that it reduced the light levels of the film due to the filters used both on the projector and the glasses themselves, and also suffered from ghosting at the best of times, especially as soon as you tilt your head to the side! This “linear polarised” 3D also requires the use of a silver coloured screen, rather than the usual white, to ensure as much light reached the audience as possible, and retaining the polarisation of the two images. 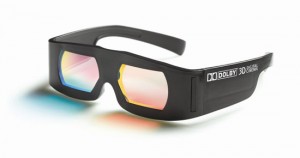 Modern 3D has come about thanks to the rise of digital cinema projection and the development of the mirror chip, providing a much better way to light a cinema screen by reflecting light off a moving mirror than the older LCD technology, which drops light levels significantly, and the CRT projectors, popular in the 1980’s which proved very bulky and power hungry. Digital projectors are able to display images up to 72 times per second, rather than the usual 24/48, coupled with the latest lamp technology means higher brightness, and less viewer headaches! Two competing systems are currently available – the most popular at present is Real D – a development of the old school linear polarisation, which uses circular polarisation instead. This means (for the most part) that films do not suffer from ghosting when you tilt your head. The second, and some would say arguably superior system comes from the cinema powerhouse of Dolby, and uses a clever array of dichroic filters to project two different bandwidths of red, green and blue light onto the screen, with the glasses blocking one (or the other) out. The Dolby system doesn’t require a silvered screen, but the glasses prove more expensive, and so make a great case for hard reusable glasses that can be washed between shows. This is vastly preferable to the disposable Real D glasses, which can be recycled, but could just as easily end up in landfill.

The popularity of 3D also owes a large debt to Pixar – The development of computer animation, and the popularity of” 3D style” animated films such as Toy Story, A Bug’s Life, Monsters Inc, etc meant that for the studios, going to 3D was an easy conversion. Even though early computer animated films were only ever meant to be projected in 2D, the content exists in a 3D space – that of the computer animation program, and allowed the producers to take the risk of creating content that could be projected in 3D without the danger of an expensive flop. The third impetus for getting 3D on the big screen came from the even bigger screen – IMAX! In the last few years developments in computing power have allowed films created on on the smaller 35mm film format be reprocessed at reasonable cost to make them suitable for projection on 70mm horizontal IMAX screens. This has allowed 3D content to be shown (and prove that it had an audience) even before regular cinemas could afford to install the new digital cinema projectors.

Despite the success of Avatar, 3D is still finding its feet. Once you’ve got past the fun of on screen items flying straight towards the camera, does it really add anything to the story? Well no. Besides, it doesn’t look as though it’ll be long before the film industry has to be moving on to its next big thing – with Sky already announcing a dedicated 3D television channel, everyone can get the 3D experience at home. So what’s the next big solution to attract viewers to the cinema? Well, hold your hats for Super High-Vision – think high definition is good quality? Well if we think of the resolution of digital cinema and high definition television is approximately 2k, or two-thousand pixels wide, Super hi-vision offers a resolution of 8k. Got that? Or is the mind boggling? Well add on the 22.2 channel audio and it should! Interestingly, this is a format being developed by the Japanese along with the nice people at the BBC rather than the film industry, but the cinema industry is already trying to improve the resolution of digital projection, which as you can see from above, doesn’t offer much higher resolution that that of high definition television at present. Still, 3D Tv has even less to offer than 3D film. I find the effect gets lost as soon as anything reaches the edge of the visible TV picture, and even in the cinema, this is something which only IMAX manages to solve to a large extent (Omnimax does a reasonable job, but not in 3D). Until we reach the stage of total immersion video/ virtual reality, I think I’ll give 3D a miss. The 3D TV demos I have seen prove to be very disappointing with a large amount of picture ghosting even from the expensive LCD shutter glasses. So, if like me you still consider 3D a gimmick, then why not check out Mark Kermode’s film blog – where he has some handy tips on how to enjoy the latest 3D epic – http://www.bbc.co.uk/blogs/markkermode/2010/01/how_to_enjoy_a_3d_movie.html