Monday 20th December saw Bradford Cathedral host the Bradford City Carol Service, organised by the Cathedral and Bradford Council. In a unique collaboration between the University, National Media Museum, the BBC, Bradford Council and Bradford Cathedral, we were able to produce a live outside broadcast of the ceremony and screen the service live on the web and the Big Screen in Centenary Square. With help from a couple of our recent graduates we used the School of Computing, Informatics & Media’s “studio in a box” (as used for our graduation ceremonies) on location in the cathedral’s reading room as a makeshift gallery. 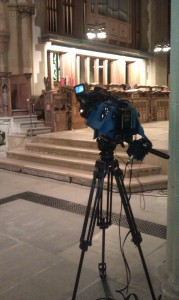 The National Media Museum’s education team, who provide teaching on courses for the School of Media, Design & Technology, provided 4 cameras and audio equipment for the event, and the output was sent via a serial digital link (SDI) on a very long cable all the way through the cathedral and up the spiral staircase of the tower to a BBC Microwave link transmitter loaned by BBC Yorkshire, and more commonly used for Look North. The transmitter on the roof was just able to be located to give line of sight to the top floor of the Horton Building up at the university, where the School of Computing, Informatics & Media are based. 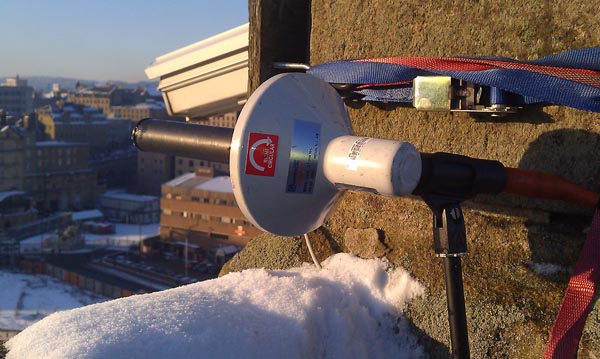 Directional Transmitter on the Cathedral Tower

We then fitted the receive end of this in the Horton building and took a SDI signal into a powerful encoding computer using a Blackmagic decklink card where the signal was streamed using Windows Media Encoder to our streaming server. From here it was streamed to the National Media Museum, from where it was broadcast to the BBC Big Screen, and viewers could tune in via the university’s website to watch the service live. In fact we picked up viewers as far away as Canada, and as close as a laptop in the Cathedral itself where one of the choir decided to use their laptop on the cathedral’s wi-fi connection!
Despite no prior rehearsals, the service went very well, and if you missed it first time round, the service should be screened again on the Big Screen over the Christmas period. My thanks go to Andy Davison, Steve Cummings, Chris Hazell, Martyn Stead along with David Wilson at Bradford Council, Chris Nriapia at BBC Big Screens and Jon Howard at the Cathedral for their involvement in this production.