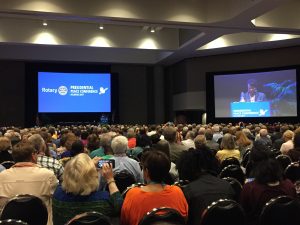 The stories we shared during the Peace Assembly prepared the ground for ideas to take root and develop throughout the next event in my Rotary Convention Triple Crown, the Presidential Peace Conference, where the intimate group of 90 or so Rotary Fellows and Rotarians from the Peace Assembly would grow to around 1500 Rotarians and friends. In the spirit of taking root, the conference was kicked off with a symbolic tree-planting ceremony where Rotary was presented with a cutting from a Ginko tree that survived the Hiroshima atomic bomb blast. The cutting would later be planted on the grounds of the Carter Center. Following the planting ceremony and rounding out the opening general session was an address by the CEO of the Martin Luther King Jr. Center for Nonviolent Social Change, Dr. Bernice King, the daughter of the Atlanta native and civil rights leader.

Hers was a message of tolerance, patience, and understanding; of rehabilitation, not retribution. She drew on a rich history of peace thinkers and social justice advocates, from 19th-century abolitionist and education reformer Horace Mann who stated, “Be ashamed to die, until you have won some victory for humanity” to a myriad of her father’s quotes including this one from his Letter from Birmingham Jail:

This and quotes like it set the backdrop for what Dr. Bernice King referred to as “getting over the me-complex and moving toward the we-ethic” as she shared stories of African American activists who met with members of the Klu Klux Klan and through a long process of mutual understanding were able to help the Klansmen turn over their robes, denounce the Klan, lead an entirely new life. She used this as an example to underscore that “No one should be out of the realm of the possibility of being one of the transformed and redeemed.” She also referenced the now ubiquitous distinction between negative and positive peace put forth by her father in Letter from Birmingham Jail the year before Galtung’s introduced his version of negative and positive peace in An Editorial. Paraphrasing her father she said, “True peace is not merely the absence of tension, but the presence of justice.” In what she called ‘disturbing the peace to make peace’ she continued, “Sometimes conflict is necessary to bring about that peace. The creation of creative tension is a way to bring to the surface issues of injustice. Conflict is not always a bad thing, but a necessary part of the change process.”

After her address, I attended three sessions that stood out to me through the course of the day and a half conference. The first session was a panel that convened representatives from ShelterBox, The Carter Center, the Institute of Economics and Peace, and the Outward Bound Center for Peacebuilding to discuss challenges in responding to the refugee crisis. Besides general humanitarian response, another theme of this panel was how these organizations were overcoming the ‘data desert’ conundrum where conflict zones often create voids of information that can be used to inform programs. In this vein, Christopher McNaboe from the Carter Center highlighted his work with the Syria Conflict Mapping Project that uses open source data to assist conflict and humanitarian responders.

During the second session I attended titled ‘The Future of Peace and Conflict Resolution Studies’ I was again presented with the opportunity to temper my personal peace-prejudices when I heard one of the panelists was introduced as a professional conflict manager. In my mind, conflict management as a school of thought and practice seems an outmoded approach to conflict response, the old-guard of first generational peacebuilding that grew out of realist assumptions about the inevitability of violence and irresolvable or untransformable nature of conflict. However, my preconceived notions were quickly dashed as this ‘outmoded manager’ of conflict proceeded to outline the most progressive, forward-thinking presentation about the state-of-play of Peace and Conflict studies and the potential for capacities-based projectized experiential educational curricula to prepare tomorrow’s practitioners, with a special emphasis on ICT4D skills. It was a lesson for me to not judge a book by its panel placard.

The Q&A session for this panel was particularly interesting. Ironically, after musings about the persistent and unfortunate cultural association of ‘Peace Studies’ as being weird and only something long-haired hippies are interested in, there was a comment from the crowd that suggested Rotarians were “singing kumbaya while a holocaust in Uganda was going on.” The gentleman’s issue was with how we were measuring our impact as an organization, and while I don’t necessarily agree with his diagnosis, his underlying question is salient. Panelists did an excellent job of responding to this questions with a discussion of what it would look like to have a task-force of Rotarians that would be charged with developing the institutional capacity to measure the impact of our peacebuilding programs. The issue of peacebuilding effectiveness is one that the whole field is struggling with now, but one that Rotarians can have a positive contribution to as it was Paul Harris who said “Whatever Rotary may mean to us, to the world it will be known by the results it achieves.” 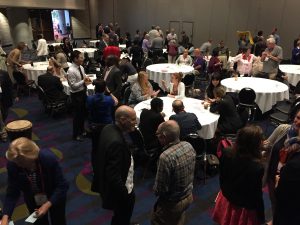 This theme merged into the third panel I attended about Rotary’s partnership with the Institute of Economics and Peace titled ‘Youth in Action and the Pillars of Peace’ where discussions revolved around grounding programs in empirics, mainstreaming the classic negative/positive peace binary, and providing a framework for Rotarians to work within to address structural factors to peace formation. With Rotary drawing closer and closer to eradicating polio, I can see how partnerships with prominent peacebuilding organizations and think tanks like the Institute of Economics of Peace are an intuitive marriage for Rotary’s future. Although measuring the cost of violent conflict in economic terms alone can be problematic, The Institute of Economics and Peace provides a technocratic framework and the familiar language of ROI to make the case for peace to skeptical Rotarians (many of which come from a business background).

On the last day of the Presidential Peace Conference we heard from keynote speaker Amina J. Mohammed, Deputy Secretary-General of the United Nations who spoke of the potential of Rotarians worldwide to contribute to the 2030 agenda, including Goal 16: Peace, Justice and Strong Institutions. Speaking of the sustainable development goals she said, “Each of these goals are like everyone of my children; individually they are great, but together they are amazing.” Recognizing she was speaking to the converted she insisted peace-minded Rotarians needed to energize their constituents to get behind the sustainable development agenda. She ended her address comparing Rotarians to snowflakes (wouldn’t be the first time for me) calling for an avalanche of leadership in our homes, communities, businesses and institutions we work and engage with in order to feed peace, to go from serving humanity to making a difference in everyone’s life. Incoming Rotary International President Ian H.S. Riseley concluded the Presidential Peace Conference with an address that included a strong commitment to focusing on peace for Rotary’s upcoming agenda. He stated, “ If we want to make sure that our service lasts, and our planet lasts, sustainability needs to be a priority right through all six of our areas of service, including peace.”

Zach Tilton is representing Idaho Rotary District 5400 as a current Fellow at the Bradford Rotary Peace Centre where he is exploring the role of everyday indicators of peace in the design, monitoring, and evaluation of peacebuilding programs.