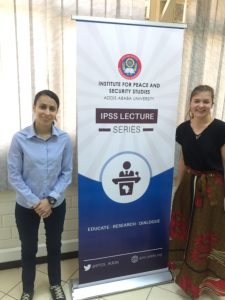 This February, I had the opportunity to travel to Ethiopia as a student enrolled in the Africa Study Visit module, which is part of my master’s program at the University of Bradford. Accompanied by seven other students, including Rotary Peace Fellow – Lydia Kröeger – I stayed in Addis Ababa for two weeks, leaving only one weekend for a visit to the city of Hawassa.

The organization of the trip was under the responsibility of Dr. David Harris and Dr. Sarah Njeri, and included pre-departure academic preparation, as well as an agenda of visits to government offices, NGO’s, CSO’s, international organizations, and the Hawassa Industrial Park. As the students enrolled had different interests in that country (e.g. security, development, politics, gender, etc.), the program was able to accommodate a very diverse range of activities, from meetings with the European Union and the United Nations Development Program, to talks with local organizations and representatives of the political opposition in the country.

It is important to understand the current political context in Ethiopia. The country has been governed since 1991 by the Ethiopian People’s Revolutionary Democratic Front (EPRDF), which has both guerrilla and Marxist origins. Having seized power after the dictatorial period of the previous regime – known as “The DERG” – the EPRDF created something unique in Ethiopia, the Ethnic Federalism, meaning the constitutional autonomy of the regions according to the predominant ethnicity (although it is not always translated into autonomy in practice). In addition, the EPRDF has a past of controversial electoral processes and violent censorship of the opposition. However, admittedly by everyone we talked to, the party was the only one capable of bringing development to Ethiopia (albeit at the cost of sacrificing real democracy), often inspired by Eastern development models, such as that of the Chinese.

The highlight of the trip, for me, was undoubtedly the opportunity to live a historical moment in Ethiopia. On February 15, while we were meeting at the headquarters of Amani Afrika, a local non-governmental organization engaged in security matters, it was announced that Prime Minister Hailemariam Desalegn had resigned. The episode, according to local and international press, resulted both from a number of popular demonstrations and a process of democratic openness (previously planned by the EPRDF, whose leadership has been in crisis since the death of former Prime Minister Meles Zenawi). It was the first time in Ethiopia’s history that a Prime Minister resigned. Unfortunately, we would not be in the country long enough to follow the subsequent chapters of this event, except for the first days of a State of Emergency (the second in less than two years in Ethiopia) decreed to last for six months – according to the government, to guarantee a non-violent succession. 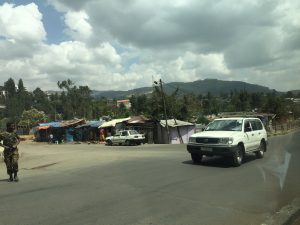 However, as a student of Political Violence and Terrorism, and a professional in public security (I am a civil policewoman in Brazil), it was a golden opportunity to be able to observe closely the paradoxes lived by this country in comparison to my homeland. Despite being an admittedly poor country, with questionable democratic openness and a history of internal and international conflicts that persist in time, police continued to patrol the streets of Addis Ababa unarmed in the State of Emergency. Only public buildings were heavily protected.

Meanwhile, I was precariously using my telephone connected to Ethiopia’s monopolized state internet service (between one blackout and another, daily), and I read that Brazil decreed, for the first time after the democratic opening, a Federal Intervention (why not say, “military intervention”) in the state of Rio de Janeiro.

Undoubtedly, Ethiopia is a Police State par excellence, “semi-authoritarian” in the general classification, with an outrageous history of violence. Even in the current government, problems with political opposition, often confused with “terrorist acts” due to intentionally broad legislation, not to mention the conflicts in almost every country with which it borders (with threats such as Al-Shabab and Al- Qaeda knocking at the gates), makes Ethiopia a peculiar state in security matters. The establishment of a State of Emergency is not something unthinkable in this context. In fact, the guarantee of stability in this country must be recognized (and studied) internationally.

However, as a visitor and critical observer, I could not feel the immediate effects of a State of Emergency on the streets. It may be that the next six months will change that perspective and there will be a setback in the democratic process that, according to the official version, was on the right track in Ethiopia. Certainly, the previously established State of Emergency has left blood marks in its history, and no one (I want to believe so) wants this to happen again.

But … crossing an ocean of political, security and historical differences, and yet seeing colleagues in the police forces being replaced by war soldiers on the streets of a so-called democratic country like Brazil, I cannot help thinking of the paradoxes between freedom and security that these two countries live.

May we be strong, in both cases, so that peace prevails.