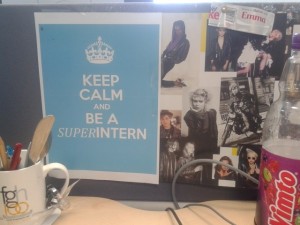 Keep Calm & Be A Super Intern

So, if you’re anything like me, you’d probably rather be reading a blog about fashion, or one about the latest iPhone to be released (other technology brands are available!), but if you’re serious about securing a placement, or just want to learn more about an intern’s experience, this is the place to be. As I’m going to try and take this blog writing seriously I’ve had a little read of older posts, and I found them an interesting read, so I’m hoping mine follows in those footsteps.

I’m sure you’ll hear many stories about how students filled in copious amount of applications to secure a placement; luckily I can say that this wasn’t the case for me. I’ll be honest and say I was really indecisive about whether I should go on a placement year, even to the extent that I had re-enrolled in my final year and attended a few lectures. But I just wasn’t ‘feeling’ university at the time, so I applied for two last minute placement opportunities, I saw the light! I had been asked to attend an interview for both, and luckily I gained the position with FGH. You’ve no idea how relieved I was when I knew I didn’t have to sit in another lecture for a whole 12 months. This is probably why I believe in fate, if it’s meant to be it will be… though a few well prepared interview questions never hurt anyone either.

As expected the first few weeks were the most daunting (although daunting really isn’t the best turn of phrase, more like ‘different’). When I first meet people I’m generally quite a shy and guarded person, and it seemed like my team-colleagues were the same, therefore those hours of silence whilst we were all working were the worst, although as with everything, given time this stopped occurring and chit-chat and banter became the norm.  It took me a good couple of months to be truly comfortable with everyone in my department, but once everyone became familiar I realised how approachable and friendly people actually were (nothing like the pretentious office types that television tends to depict). Having said this, I believe that you truly get an insight into the people you work with when attending out-of-hours social events, Christmas parties and work trips tend to really help people relax… the addition of alcohol plays its role too.

I won’t lie, the ‘thrill’ of Tequila on a Wednesday, and the inevitable antics of a Thursday night in Tokyos are something that I did quite miss in the beginning, but being able to enjoy the delights of partying on a weekend with a mind purged of work related thoughts was something I quickly became accustomed to! The 9-5 lifestyle is definitely the way forward… although at the moment I am particularly envious of my graduate friends who are now enjoying their 2013 summer.

Next instalment: A typical week in the life of an intern

P.S. I wish writing 500 words was this easy when it came to assignments.