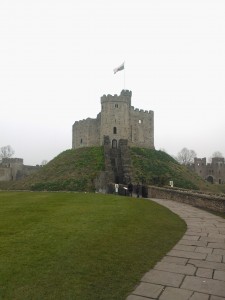 My name is Katie and I do BSc Archaeology. I am currently in my placement year based in Cardiff, having decided on doing the 4 year course. I’m originally from a small town called Burton in the Midlands but as soon as I finished my A-Levels, I decided straight away I wanted to go to university and go for my dream, having always wanted to be an archaeologist since I was a little girl.

The first year of my course was awesome. Meeting new friends was quite fun (also living with 2 girls on the same course as me did turn out to be pretty awesome stuff as well) but also the learning aspect just sold it for me. At this point, I was only on the 3 year course, but by the end of the year, I decided to change straight away to the 4 year – being quite excited to do the year out being in the field I want to be in.

Second year was a bit more tough – a lot more work to be done but in the end, a great year. Meeting other students who were on similar courses to me but were doing the same modules was very interesting. By half way through the year it came to finding our placements for when we finished the second year. Through contacting museusm, archaeology departments, universities and archaeological projects, I was able to find a couple of places that would be willing to take me on as a volunteer (having discovered that they couldn’t offer paid placements).

Once my second year was over, I moved down to Cardiff ready for a placement at the National Museum Wales. During this 4 week placement (as a volunteer) I sorted through thousands of pieces of pottery from sites in South Wales, noting what the accession numbers were (to be put into the museum database) and how many objects there were.

Alongside this placement, I am currently working as a volunteer at the National Museum of Wales again. This time the placement is based on what I did in the summer last year, but working on the data we collected to put it into the database.

I’m going back to University in September for my final year, but looking at going to do a Masters in Conservation at Cardiff University after I’ve graduated.