I’ve done it again. Promised a blog post and got bogged down rather than down blogging.  Bad Claire.

Anyhoo, following a prompt from Brian’s IWMW 2012 and the Cookie Monster – 28 Days Later post I thought I had better sum up some thoughts around IWMW 2012 and plans going forwards in terms of the sector and cookies.

IWMW 2012 was a month ago and we all headed to (a surprisingly) sunny 3 days of seminars, plenaries, carbohydrates and heated debates about designing websites for mobile (and dancing and football, but not together).  I was running a couple of sessions this year, the first one with Rob Englebright from JISC around the XCRi Programme of work of which Bradford is part.  It was slightly strange to be running a session before any formal welcome from Brian and the team but the session went well and feedback after the event was positive.  More information about the JISC Course Data Programme is here. 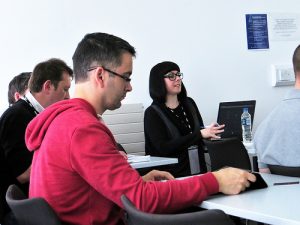 The XCRi session in full swing – image from the awesome Sharon Steeples: http://www.flickr.com/photos/ssteeples/

I attended Christopher Eddie’s session in the afternoon entitled ‘I’ve got this idea for an app‘. It was great to see a case study really describe a whole project in detail from idea to inception rather than glossing over bits due to lack of time or perceived lack of interest.  Thanks to Christopher for such a detailed account of Oxford’s app development journey.

And then there was the Welcome!  We were welcomed to Edinburgh (a city I have long had a fondness for due to spending MANY summers there at the Edinburgh Festival Fringe as a student and beyond) and then to IWMW 2012 itself.  It was great to see the auditorium so full. We’d caught up with friends from previous events throughout the day and on the Sunday night when we arrived but it was great to spy people across the room and catch up with them later.

The final session of the day was from Kevin Ashley and had the potential to be a bit snooze-inducing after a long couple of days.  But it was far from it!  Kevin talked to us about Data and the Web Manager and this, for me, was to be the major theme of the conference.  Is it the role of the Web Manager to understand all of the data across an institution and then make it work for the institution? Possibly not, but we tend to be in the middle of things and make connections between activities that others may not and so it seems right and proper that we should get involved somehow.  Some institutions may have Data Officers (we do, of sorts, although they have a million other things to do) and so maybe we should be pushing for a more centralised and co-ordinated approach to all data across our institutions that it be utilised and released to achieve its potential, rather than duplicated, mislaid, gappy, inconsistent and unmanaged.  I’m involved with our XCRi and KIS projects and have joined a working group to begin to look at data across the institution.  It’s not big or clever at the moment but it can only get better.

Day one ended with the inevitable dancing shenanigans which was great fun if slightly hairy thanks to Duncan’s highland dancing skillz!  And much talk about the cookie issue.  But more on that later.

Day two started with a continuation of the ‘data’ theme with City of Edinburgh Council sharing with us their open data agenda journey.  It was a bit of a lightbulb moment for me in terms of all the data we have locked away that people could do cool stuff with – way cooler than we would ever have the time to do.  Would HEFCE ever mandate that we all share what trees we have on campus, or the price of a muffin in the canteen? Probably not, but they do mandate we share some data, KIS for example, so maybe now is the time to start looking at all institutional data and seeing how it could be utilised either to better inform prospective students, our current staff and students, improve our reputation generally, or help to differentiate us in the crowded HE market.

Then we had the fabulous Tony Hirst and Martin Hawksey blowing our minds with data visualisation. Data can be complex, confusing, boring, lengthy and tedious and yet it is the bedrock of many of our activities. How many times have we asked for ‘how many of our students through Clearing come from Sheffield’ only to be given masses of numbers in tables and told ‘have a look at this.’  What if we had a heat map of the UK with where our students come from through Clearing?  We have data experts but I count the number of these in the institution on one hand, and yet hundreds of staff need to be able to interpret and act on data to ensure the successful running of the University.  We need to get cleverer with how we visualise our data to get the most out of it.  We need to get Tony and Martin in!

After a green tea and a biccy we heard from Andrew Oakley from HESA on the KIS.  I possibly didn’t get as much out of this session as others as I have been involved in our project here for most of this year.  However the chat it generated after the session makes me think that a lot of people in the room weren’t as close to their KIS project as they possibly could be so I am sure lots of people had colleagues to contact when they got back to the office.

I was really looking forward to the Experiences in Implementing BS8878 talk as this is an initiative I have tried to get off the ground here at Bradford, but we’ve not quite found the space in our crowded diaries to get very far with it.  We are badging it as ‘we have sorted out our real estate in terms of accessibility and now it’s time to sort out our virtual estate.’  The University of Southampton’s project was ambitious and impressive and demonstrated the need to have a university-wide project team with high-level sponsorship to enable something as cross-cutting as BS8878 to be adopted and embedded.  It has prompted an email to colleagues to kickstart our investigation of adoption of BS8878 so watch this space.

The post-carb slump was avoided as we had the controversial Professor Ferdinand von Prondzynski to fire us all up after lunch.  It’s clear that he’s not keen on most University websites but seemed to have no nod to the fact that he wasn’t the target audience (in the main).  It was a little condescending to a room of web professionals and I fear that any message he may have had about senior teams demanding unnecessary news banners on home pages was lost in his general rantiness.  You can see more rantiness here: http://universitydiary.wordpress.com/

The other emerging theme of the conference was mobile and the first plenary talk on this subject was Rob Borley from Headscape with ‘Do I need an app for that?‘  It was an engaging and entertaining look at the issue of having an app (or not) set in the context of the huge growth in the mobile market and the changing patterns of use.  Much food for thought when dealing with colleagues who ‘need an app for that’.  Thanks Rob! 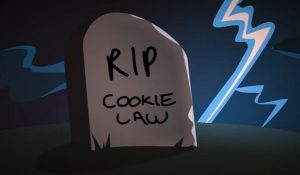 Image from the brilliant video by SilkTide: http://www.youtube.com/user/silktide

And then it was the parallel session to defy all parallel sessions.  The much awaited (ahem) ‘Responding to the Cookie Monster‘ session. I have to admit to being nervous for a couple of reasons – I was running the session  with (the fantastic) John Kelly from JISC Legal and we had never met!  And I felt as though I had to know everything about this complex (and dull!) subject, when really I’d put in as much work as I thought necessary but also attempted to shivvy the sector along a bit. I had no reason to be nervous as the session went well and I’d like to thank the audience for being engaged and engaging and giving us good feedback in the evaluation:

John set the legal context and then I outlined Bradford’s approach to dealing with this issue, and also what John, Brian and I had done overt the last 12 months either on behalf of, or with, the sector.  My slides are here: http://www.slideshare.net/Planetclaire/how-bradford-made-friends-with-the-cookie-monster-v01There were a few different approaches in the room but what was clear is that each institution had spent time, and therefore money, on managing the risk around this topic.  And so the following have been mooted:

So we sort of made friends with the Cookie Monster but it was a bit painful and bumpy along the way.

The evening kicked off at Dynamic Earth for drinks with a polar adventure and a trip to a tropical rainforest.  Then we headed towards Cowgate to watch a football team beat another football team!

Dawn Ellis fairytaled her way through the University of Edinburgh’s website development project and then Bradford’s own Paddy Callaghan joined forces with Keith Doyle to talk about responsive design and large-scale websites.  This is a project we’re really proud of here at Bradford – adopting a responsive design approach iteratively starting with our Undergraduate website.  This might not be an approach that suits everyone and the session wasn’t designed to be a ‘this is how you do it’ lecture, more of a ‘this is HOW we did it and why’ case study.  It generated quite a bit of interest after the session which was good.  Go Paddy! 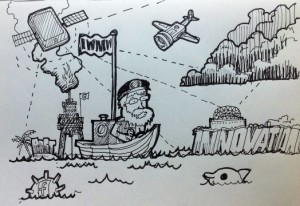 Helen Sargan took us through the last two years of running a CMS at Cambridge – interestingly with Plone. And then the ever inspiring Stephen Emmott rounded off the sessions with a great insight into Measuring Impact.  This is very much a hot topic within HE at the moment, not least due to the impending REF, and it’s possibly something we’re not as good at as we need to be.  We’re very good at getting stuff done but we possibly don’t close the loop enough in terms of measuring whether what we’re doing is the right thing or not.  This rounded off things nicely and joined the dots between the very first talk from Kevin Ashley and the Data Visualisation talk from Tony Hirst and Martin Hawskey.

Brian rounded things off nicely and brought another fantastic IWMW 2012 to a close.

At this point it’s worth a massive shout out to Kevin Mears for his splendid doodles – they captured and depicted the conference in a way never seen before and complimented the technology driven resources really well. I now have the full suite on my wall next to my desk as a constant reminder of an inspiring and entertaining three days.

There’s tons of resources from the conference on the IWMW website so head to: http://iwmw.ukoln.ac.uk/iwmw2012/key-resources/

Here’s to next year.