This was a mammoth task, as the project extended beyond just these web pages, and into our Study and Student Life sections on the top level website.

Both of these top level sections were very much tied into the content on the Undergraduate website, but had become unwieldy, with the Study section having over 20 main menu items – a clear no-no. This had happened because, over time, more and more items had been added, particularly after the absorption of one of our Academic Schools’ functions into a more central position – much of the content which had lived on another site had been moved over, and due to its central nature it had largely landed in the Study section. 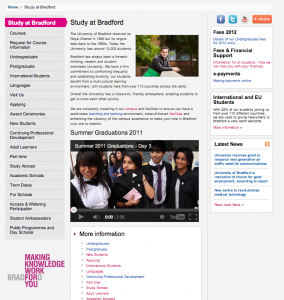 The Study section before its makeover

What we had to do was first to audit the existing UG site, deciding what would stay and what would go, and what content from our new prospectus would make it into the site for the first time. Then we audited the Study and Student Life sections, and made new structures for each. Amazingly, we managed to whittle down the 20 sections in the previous Study section to just 6. Most of the content is still there, but with some common sense reorganising it became a far easier section to navigate.

Another tricky thing was to rearrange and restructure this top level content, whilst also making sure that any links to it were redirected or changed as we went. We had to restructure these sections at the same time as we were creating the new UG site structure, because all of the UG content would link out to elsewhere, and mainly to these two top level sections. So as you can tell, it was a fiddly and painstaking task, with every action having a consequence on the structure of all of the other linked sections: a domino effect.

We edited, tidied and improved the content in the Study and Student Life sections as we moved it into the new structure, giving it a spring clean and making note of sections we will go back to at a later date to do some more work on. 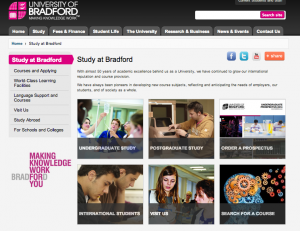 The Study section after its makeover

Many of the sections and much of the content on the new UG site would be very similar to the old UG site, as the University hasn’t changed drastically in the time the site was last reviewed. But we needed to create a site which clearly reflected the emphasis and the style of the prospectus, to create a clear continuation.

New elements of the prospectus this time included infographics – handy tools to translate important facts about the University (which demonstrate, rather than preach about) the University’s key strengths. For example, we could wax lyrical about how well equipped and modern our learning and teaching facilities are, but every university does that. What the infographic does is highlight that we have spent £120million  on updating and building new facilities in the past few years, something which clearly demonstrates what we are talking about and which not many universities can say.

We wanted to use these infographics on the website somehow, and also to use some elements of the prospectus design, such as large images covering the top half of each page, and the colour palette as well. The way us content editors wanted to do this was to have all or most of our multimedia web content in a featured box at the top of the page, rather than embedding videos and pictures throughout the copy. We would then have some well formatted web copy underneath and links in standard place on every page, linking out to those top level sections.

In some cases this would mean having one featured image at the top of the page, and sometimes this a video gallery which visitors could flick through as they read the content below. So far, so good. The problem came when we wanted to do the same thing with video. It proved more difficult for Paddy, as a developer, to make this work AND look good than we had all imagined, and he had to try a few different tricks before it met both of those criteria. 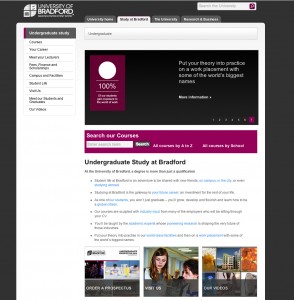 The copy we took from the prospectus was cut and edited for the web, as it had originally been done for print. This is always a staged process for us as we go through a few times working out what we can cut to present the most effective and minimal copy, as well as deciding on what rich content we can use to bring it to life.

We used existing video content, and could use up to five videos in our new video gallery area, which is plenty for one page. Most of these were on our Academic Schools pages, where we had to present an overview of that School using multimedia content. We also included our most overarching Undergraduate focused videos and made notes of section with no suitable video content as yet. 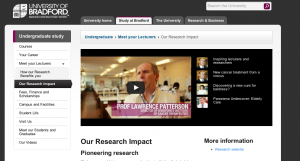 The structure is such that the site can continue to evolve, as far as content goes. There are more videos in the pipeline: student life, study abroad, work placements, volunteering, the city, facilities and the students union among others, which will make it as complete an introduction to Undergraduate life and study as possible.