It was 50 years ago in October that we started as fresher’s attending Bradford University Mechanical Engineering Department.

Hence, we duly arranged to meet and re-visit Bradford University on Wednesday 18th October 2017. The meeting was attended by Gaynor and Harry Haigh, Lynda and Barry Cope and Ann and John McEvoy (the three doughty alumni and their wives).

Since we were from the far corners of the UK, we arranged to meet at Harry and Gaynor’s house from where we travelled in one car to the university. Immediately on arrival, we noted that the University transformation to the present day was incredible, and so took a photograph outside the Richmond building.

We located the new Mechanical Engineering Department in the Horton building and had fun taking our selfy under the sign that stated “Student Support Office”. We enquired if they helped, er, “slightly older students”.  The Mechanical Engineering secretary greeted us with a smile, was very helpful and provided a map of the university campus. 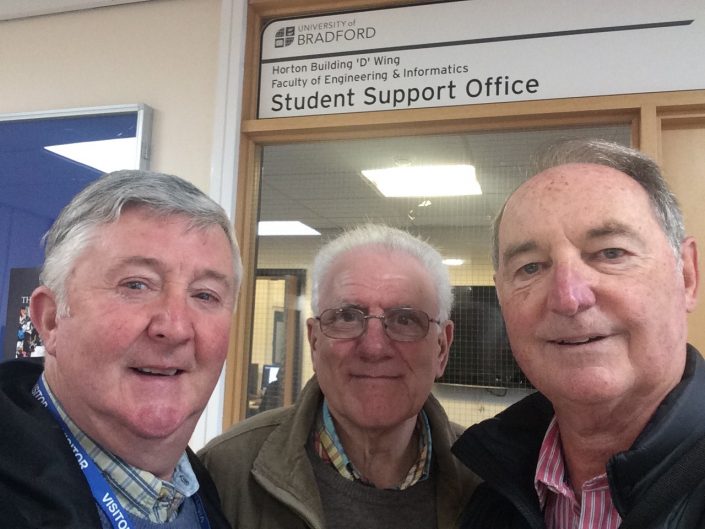 We tried to contact Professor Gough, Head of Mechanical and Automotive Engineering Programmes, but he was unavailable……we should have made prior arrangements, but our visit was spontaneous.

We signed in as visitors and had a little tour around the Bradford University Richmond building taking the elevator up to the 7th floor. This was our old Mechanical Engineering floor with the then Professor Jagger. We spoke to some 2nd year students there who looked puzzled as to why three older gentlemen were strolling along their floor……we explained and filled them in on our historical visit and past events – such as our four year sandwich course, and that mobile phones and calculators had yet to be invented, and that there were no computers on campus.

We then rested in the atrium restaurant and took a photograph in what used to be our car parking area, whilst reminiscing the good old days. 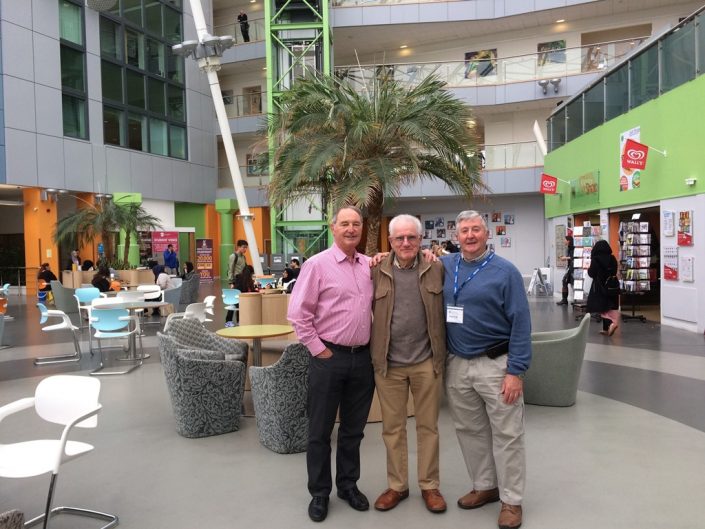 We then visited Bradford’s National Science and Media Museum where Tim Peaks Soyuz space capsule was on display and we sat in on the virtual reality show taking some photos. 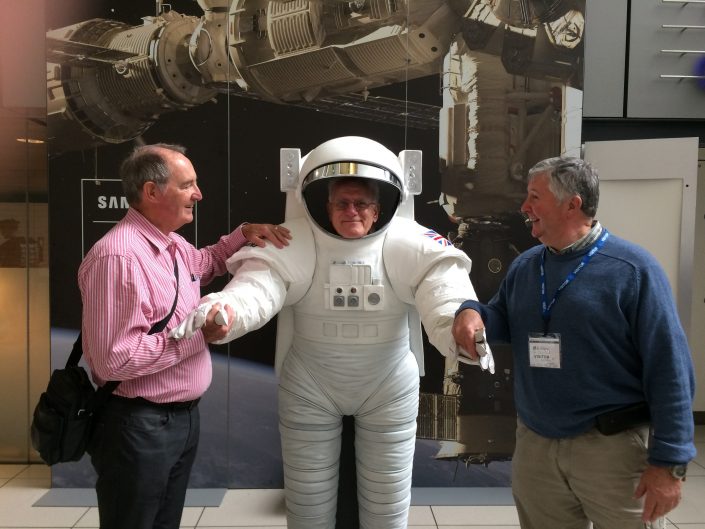 Afterwards, we travelled to Cleckheaton, a town just south of Bradford, for a late afternoon lunch, and then travelled to Harry Haigh’s house for a Champagne celebration.

Following some light tea, we left for home, but not before we had given Harry’s grandchildren a lecture on how the solar system was formed from the solar nebula!

This was a long day for all but well worth the effort. We had a great time bringing back old memories and good times.

Below is shown our class group photograph of 1971: 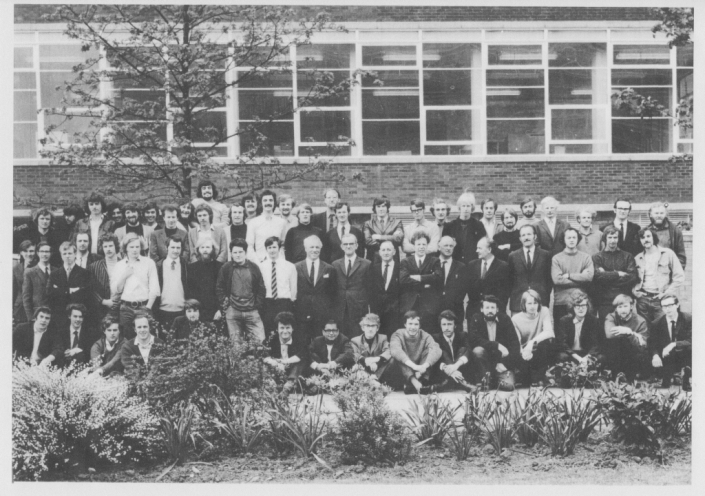 John McEvoy is stood central, next to lecturers, with a light shirt and striped tie.

The fourth person to John’s right, next to Barry Cope, with open neck light shirt, is Philip Prichard, now Professor Pritchard at Manhattan College in New York City (who intended to join the three of us, but couldn’t make the trip), author of a couple of best-selling engineering textbooks, and other publications.

Where are we now? Well we all graduated from Bradford University in 1971 with B.Tech (Hons) degree, which was later changed by the university to BEng (Hons), we are now retired and still keen on engineering matters.

Below are some career historical facts about each one of us.

In my final year at Bradford, computing facilities became available which enabled me to apply Finite Element Analysis techniques to analyse the stresses in pin-jointed structures. This became my end of year thesis and the start of my interests in using computers to solve engineering problems.

After university, I applied for and got a job in which the advert stated “the company’s new computer now had sufficient power to solve engineering problems”. This was at a time before desktop computers and when a computer the size of a room was required to design roads and bridges. They wanted someone with both engineering and computer knowledge to source, implement and instruct their road and bridge design engineers in the use of computerised systems.

Later, and with a different organisation, I used FORTRAN (the standard programming language for engineering systems) to develop solutions. I also did Systems Analysis and Project Managed a number of projects before finally retiring from the post of Principal Consultant.

When I left the University of Bradford in 1971 with an honours degree in Mechanical Engineering, I returned as a machine tool design engineer to the machine tool company that sponsored my course.

I left that company two years later and became a design draughtsman in a large carpet factory doing project work and research and development.

My next move, again two years on, was to become a project engineer in a large multi-national textile company. I remained in this organisation for seventeen years and progressed to become a chief engineer responsible for design and installation of capital projects and management of works facilities and plant engineering. During my time there, I designed and developed cashmere dehairing machinery and associated processing plant and equipment, lanolin extraction processing plant and many other novel machines and equipment. I worked often with companies based in Europe and became an agent for an East German wool-combing machine manufacturer.

I formed my own Limited Liability Company In 1990 and offered the full range of engineering design, manufacture and facilities management services to local industry, commerce and domestic enterprises.

In 2000 I obtained QTS having obtained a postgraduate degree from the University of Huddersfield and became a School Teacher of Design and Technology. I was engaged in this occupation until my retirement in 2006

After graduating, I returned to my sponsor company in their newly formed Group Development department as a mechanical engineer. There I progressed to Project Engineer. After 17 years the then conservative government, under Margaret Thatcher, closed the company making all employees redundant.

This proved to be to my advantage as I was headhunted by a Manchester company and was employed as a consulting engineer, from where I formed McEvoy Consulting Engineers Ltd.

I had various contracts over a eight year period, dealing with power plants (India), Citric Acid plant (UK), Naphthalene plant (UK), chemical injection packages (worldwide) when I was again headhunted by two independent American based companies tending over an 8 years and 20 year employment periods becoming lead / Principal Engineer and Engineering Manager of a multi-national company involved in EPC work relating to oil and gas refinery’s, polyethylene and polypropylene plants. This work took me to far off places including Kuwait, Saudi Arabia, South Korea and China. I had a number of years in each country, with China being the longest (for 3 years) posting and thoroughly enjoyable.

After retirement, I joined the Open University and gained a certificate in Astronomy and Planetary Science. I now participate in open reach and present astronomy talks to brownies, scouts, local schools and various astronomy clubs.

I assist the Institution of Mechanical Engineers at various functions, such as the Imagineering Fair and local Northants group committee.