Our post today is by Steve Tillotson, one of the Information Advisers in the Career and Employability Services team, who delves into selection tests…

Our advice to students who are facing psychometric tests is “practise and you will get better”, but is that really true? I decided to put it to the test by using our Graduates First portal, tackling my personal bugbear, the Logical Reasoning Test…

There are other types of selection test, such as verbal reasoning and numerical reasoning, but these tend to be pretty straightforward (although extremely challenging)- they just require concentration and a real focus on the specifics of the question.

Logical reasoning tests are different in that there is a sequence of images where the challenge is to figure out what the rules are, and which image from a multiple choice selection is the next in sequence. To complicate things, each part of the sequence can be made up of multiple elements which each can have their own rules, and it’s timed – you get a minute for each question.

There are seven practice tests with 14 questions each on Graduates First, but I skipped through the first one to try and get an inside track on how the tests work – once you have completed each test there is an in-depth results section that fully explains what the answer was.

Armed with this knowledge, I confidently cracked on with test two…

So how did I get on? 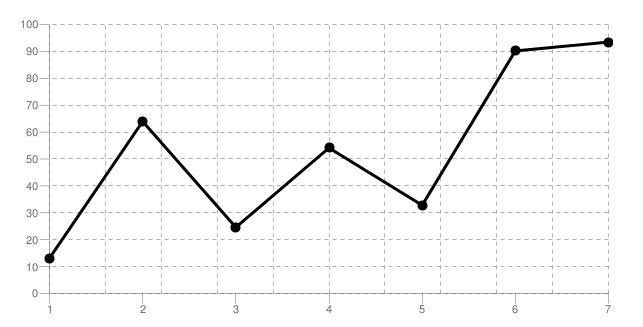 So discounting test one which I skipped through, as you can see from the above graph I made a pretty strong start, 65%, which was at the top end of average. I also read through all the answers to see where I went wrong (and to check why I was right) to try and improve.

I confidently cracked on with test three, armed with the knowledge I had acquired and got 25%, disaster! There was a few curveballs in there which caught me out – it seemed like there was more to this game than I thought…

On day two I did another two tests, and a similar pattern emerged – a reasonable score followed by an atrocious one. I was finding it difficult to keep track of the various rules, and looking at the answers I felt I was getting there, but just not being accurate enough. To be honest, I was feeling a bit dejected at this stage as it was looking like no amount of practice was improving my performance, and with only two tests to go…

Day three, and as you will have seen from the spoilery graph above, I got the Hollywood ending that this blog post was needing, with 91% and 95% on my last two tests (“Grade A – Excellent”, thank you very much).

How did I improve my results so drastically?  I’m glad you asked; It was a actually a pretty straightforward technique that was suggested in the advice on the Graduates First pages that up until then I had ignored – DRAW THE ANSWER! I couldn’t keep track of each rule in my head, but by drawing where I thought each element would be, I didn’t have to. I also ignored the answers on the screen until I’d finished my drawing and usually there was something that resembled my sketch, so I’d plump for that, and it seemed to work, phew!

So what’ve I learned?

Thanks Steve. If you’re likely to face selection tests of any kind, be sure to check out the information on our website, but definitely practice as much as possible on Graduates First- University of Bradford students can log in here.

And if you’ve got any further questions, get in touch with us to arrange an appointment with a Career Consultant.