The Centre for Applied Dementia Studies was well represented at the 29th Alzheimer Europe Conference “Making valuable connections” that was held in The Hague from the 23 to 25 October 2019. Gail Mountain, Akhlak Rauf,  Ana Barbosa, Catherine Quinn, and Vasileios Stamou attended this conference that offered a mix of plenary and parallel sessions, symposium presentations, and poster displays. 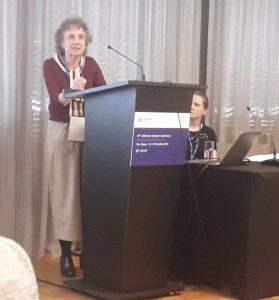 Professor Gail Mountain presented the recent quantitative findings from the Journeying through Dementia – an intervention developed to promote self management and social health (in particular through engagement in life) following dementia diagnosis. The intervention has been evaluated in England from 2015-2019 through a pragmatic randomised controlled trial with 480 participants in 13 sites. In her presentation, Gail discussed how to further develop knowledge which places the person at the centre of support services. 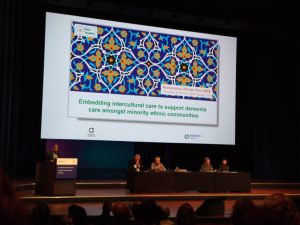 Being asked to present at Alzheimer Europe 2019 Conference #AEC2019 was a fantastic opportunity, but to be asked to present as a keynote speaker was both exciting and nerve-wrecking.  Having worked with the Alzheimer Europe working group on ‘Ethics’, I felt the opportunity to present this work in line with my other ‘expert by experience’ skills and practices would create a holistic approach to BAME dementia and dementia care. Delivering a talk on ‘Intercultural care and supporting minority ethnic communities’, I was able to bring together the lived experiences of carers (my involvement through Meri Yaadain CiC) as well as the PhD doctoral research at the University of Bradford. Alzheimer Europe gave me a platform from which I was able to draw out the nuances of migration and social construct of dementia and dementia care.  It also enabled for there to be a ‘realisation’ of the fact that each of us has a lived experience which can act as a barrier or facilitator in how we engage with research, health and social care practitioners or indeed the level to which we may trust institutions. This was important to share as it helped people think beyond the concept of BAME being the narrative of the ‘other’.  It exposed our own prejudices in how we may indirectly or subconsciously prejudge how we undertake our own practices when supporting BAME people living with dementia or their family carers. As communities and families go through transitions themselves, service provides, commissioners and practitioners (as well as researchers) need to adapt.  I was especially pleased that my colleagues were there to support my and the fact that I managed to get some influential people tweeting about my presentation – including one that said it was the best presentation of the conference – now that is blowing my own trumpet isn’t it? 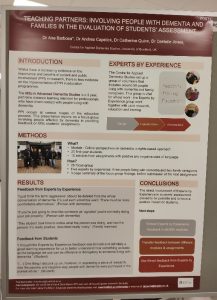 This was the first time I attended Alzheimer Europe Conference. I found the conference to be an enriching and diverse event, a great opportunity to learn and hear the latest research in dementia care and to network with international academics. I was particularly surprised with how inclusive the conference was, with people affected by dementia being actively engaged in a number sessions, either as speakers or symposiums chairs. I presented a poster on how we involve Experts by Experience in our MSc Advanced Dementia Studies, specifically in providing feedback on postgraduate students’ assignments. The poster incited lot of curiosity – there were many rich conversations about the topic, positive feedback, and it was fantastic to see how keen people were on getting to know our work. It was also the first time I attended the annual INTERDEM meeting: a multi-professional group of researchers from Europe. I had the opportunity to reunite with old colleagues and fully enjoyed the discussions which provided a better insight into the present and future work of this group. 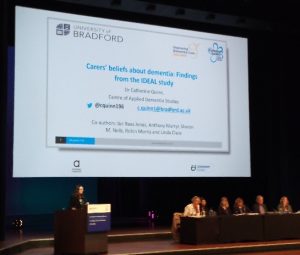 The theme of this year’s Alzheimer Europe conference was on “making valuable connections” which I find to be a good summary of the conference as it enabled me to re-connect with some colleagues who I met at the previous Alzheimer Europe conference. I always find Alzheimer Europe to be an incredibly friendly conference, you tend to ‘bump’ into people you know and everyone is very sociable. There seemed to be two major themes at the conference, one around early-onset dementia and the other focus on technology. For me, the session that had the most impact was the one delivered by Helen Rochford-Brennan who, whilst applauding the increased involvement of people with dementia in research, identified that patient and public involvement (PPI) “is about consulting many people not just one person with dementia to tick the box”. This reminds me of advice given to me from Keith Oliver (who is living with dementia) who talks a lot about PPI not being ‘tokenistic’, he wants his contributions to be valued by the research team. We’ve come along way with PPI involvement in our studies, but clearly there is more work to be done. 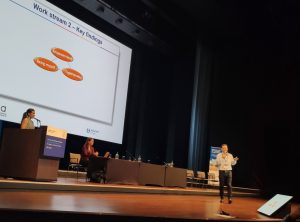 The Bradford Dementia Team always has a strong presence in national and international dementia conferences. This year, I had the opportunity to join the team at the Alzheimer Europe conference, which included many interesting sessions, covering a wide range of topics and bringing together a stimulating mix of delegates. During the conference, I presented the final findings of the Angela Project, on which I have been working during the last three years. The Angela Project is a national study, which aims to improve the diagnosis and post-diagnostic support for younger people with dementia (onset < 65) and their families/supporters, via the development of guidance on good practice. We received very positive and useful feedback regarding the potential of the Angela findings to make a difference in real-life practice, which was very heartening. I also had the opportunity to present the study findings in members of the INTERDEM network, which held its annual international meeting in the context of the Alzheimer Europe conference. As the Angela Project and my work at the University of Bradford are soon coming to an end, I would like to emphasize how proud I have been to represent the Bradford Dementia Team in the Alzheimer Europe and other national and international conferences during the last three years.