On 7th April I was one of the speakers at a one-day event on Dementia and Everyday Life: Creative Approaches at the University of Manchester.  The event was jointly organised by the Morgan Centre, the Dementia and Ageing Research Team DART) and the Manchester Institute for Collaborative Research on Ageing MICRA).

The aims of the day were to explore the conceptual and methodological challenges that arise in research on dementia in everyday life across a range of disciplines in humanities, health and natural sciences. The focus was on the creative approaches that are increasingly being developed to tackle questions of selfhood, relationality, materiality and narrative in dementia research. 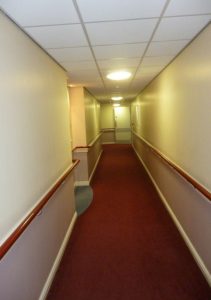 The morning speakers were Dr Lucy Burke, Department of English, Manchester Metropolitan University and Dr Jackie Kindell, a Specialist Speech and Language Therapist in Older People’s Mental Health.  After lunch one of our own Doctoral Training Centre students at Bradford, Denise de Waal spoke about her PhD study which will use photo diaries to explore the day to day experience of living with dementia and co-morbidity.  Next was Dr Christina Buse, Department of Sociology, University of York who spoke about two studies she has been involved in, one on clothing and dementia, the other on architectural design.

My own slot, last of the day, and titled ‘Escaping from long-term dementia care: recollections of home and the unhomely’ was based on visual and ethnographic research carried out in the same care facility over a period of three years.  The first section was based on photographs of the care environment to demonstrate a variety of reasons why care environments are not perceived as ‘homely’ by the people who live in them. 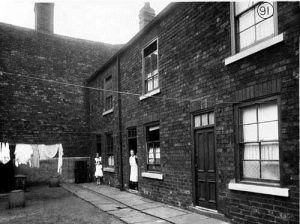 Used with permission of Leodis

Next was some narrative data on associations residents had with earlier homes, emphasising concepts such as neighbourliness, social support, helping each other and being self-sufficient.

Finally I showed one of the short films made with one of the participants in our NIHR-funded research about her home in Wavertree, Liverpool where she lived from the age of about 6 years old.

As a conclusion to the day, we had all been asked to take along a ‘dormant object’ – something that had been put away unused, and particularly if that had belonged to an older relative or relative with dementia.  We spent the last hour drawing or painting the object whilst talking to others at our table about what meaning it had for us.  This was a method of trying out in practice a method called object elicitation, which is growing in popularity in research with people who have dementia.

The whole day was recorded by artist Lynne Chapman who produced an amazing scroll-like record of everyone’s presentations in coloured ink.  Jointly hosted by Dr Andy Balmer of the Morgan Centre for the Study of Everyday Lives, and Sarah Cambell of DART, University of Manchester this was a very enjoyable, instructive and thought-provoking event.  Andy and Sarah are hoping to arrange future events to keep the discussion going.