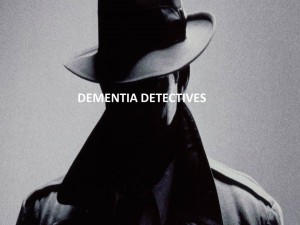 So what is Dementia Detectives?
Dementia Detectives is an hour long workshop for teenagers delivered in school or college.  The aims of the workshop are simple: Bust the myths surrounding dementia and learn how to support people living with dementia in the community.  The sessions have been developed in consultation with teenagers.  The detective theme is used to capture the notion of ‘truth finding’ and encouraging team work between students.  Dementia Detectives is usually delivered by a knowledgeable facilitator referred to as the ‘Chief’.  Students split into five detective teams: Team Sherlock, Team Quincy, Team Marple, Team Morse and Team Columbo.

The workshop consists of short talks presenting the best evidence about dementia to counteract myths and stereotypes.  The facilitator talks about the nature of dementia, how lifestyles and other factors can put people at higher risk, the way dementia affects the life of the person, the way it might be noticed by family and friends, and what can be offered to support people with dementia. The facilitator emphasises that the experience of dementia is unique to each individual.  A Prezi has been set up to aid the delivery of the content and also to act as an online resource for students and teachers. The session also includes several interactive activities which target specific misconceptions about dementia. For example, “Operation Identity” involves students reading profiles of people and attempting to identify which individual has dementia. The key message of the activity is that we cannot identify which person has dementia based on information about their demographics and any assumptions made on the basis of stereotypes are wrong.

We have been overwhelmed with the positive feedback we have received from people living with dementia, health care professionals, teachers and young people about Dementia Detectives:

@TommyTommytee18 “This dementia detectives scheme gets my seal of approval #dementiadetectives.”

@ripaljeet “The work of @DemDetectives is a perfect example and amazing work of @TommyTommytee18 in the #schools.”

We are currently conducting focus groups with secondary school students (Operation POD) to further develop the workshop.  We have been struck by how keen the students are to learn about dementia: “It’s just like good knowledge to have, like just in case it comes about, then you know about it and you don’t sound like ignorant, like you don’t care, like if you know about it, there’s more of a chance that you can help someone.”