The Centre for Applied Dementia Studies is very pleased to welcome Professor Noriko Tanaka, who has come to visit us until July 2018. Noriko tells us about her time here at Bradford.

Conversations with my mother, and the journey to becoming a conversation analyst with an interest in dementia 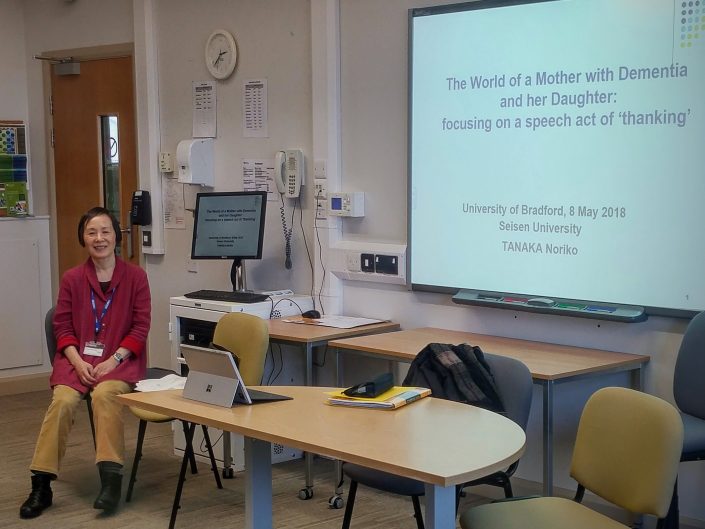 I finished my Ph.D. in Lancaster in 1993 (25 years ago!); the title of my thesis was “Pragmatics of Uncertainty: its realisation and interpretation in English and Japanese. I am a linguist, and I teach linguistics at Seisen University in Tokyo, Japan.

As a linguist, I have analysed the conversations between my mother and myself for about ten years. Since my father passed away, I called my mother almost every morning and chatted with her on the phone. With her permission, I recorded the conversation and used the transcription for analysis. I started the research with a purely linguistic focus, such as the use of indirectness, sentence-final particles, such as ‘ne’ and ‘yo’ in Japanese language, and so on.

However, when my mother became around 80, she often forgot things. I was very concerned and decided to move to a flat within a 1-minute walk from her house. We discovered that my mother was living with dementia. Our morning conversations continued for nearly two more years until she moved into a care home. At the age of 83, she passed away, leaving my beloved conversational data behind.

I decided I would like to understand my mother and people living with dementia more, and after some time, I looked into the conversations between my mother and me.

Why I wanted to visit the University of Bradford

I wanted to learn more about dementia, which led me to read Dementia Reconsidered by Kitwood, T. (1997), which is also available in Japanese translation. I attended the DCM course in Japan, which interested me in the University of Bradford.  Fortunately, my university allowed me a sabbatical year, and I decided to come here.

When I sent an e-mail to Bradford from Japan, I was not sure if I would be accepted as a visiting scholar.  I was quite surprised to find that I was not only accepted, but given various opportunities. 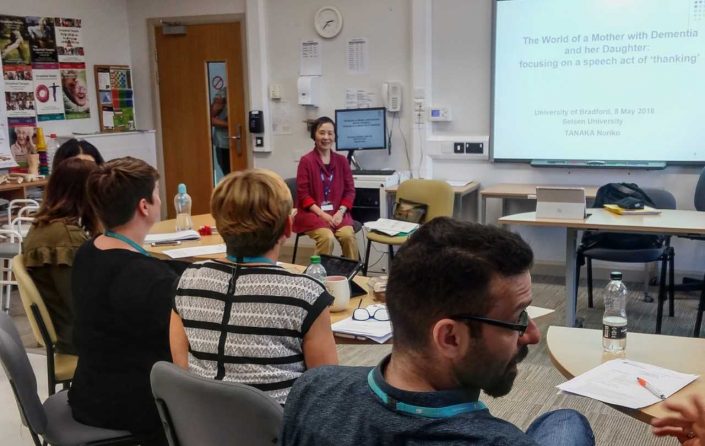 One month has passed since I arrived in Bradford. Thinking back through these days, I am very grateful to everyone at the University of Bradford, especially to the staff at the Centre for Applied Dementia Studies.  They have accepted and included me with warmth and respect, exactly with the spirit of person-centred care!