With one day to go before the launch, there was a nervous air around the gallery. Caroline could be seen pacing back and forth going through her mental to – do list, and making frantic phone calls to make sure there were new bulbs putt in the spotlights, the plug sockets were all checked and working, the screen and projector had been ordered for Professor Coldwell’s talk, and that the cleaners were going to give the space an extra clean that night.

Despite the last minute nerves, there was little left to do for the gallery team (as the electrical side of things were out of our hands for health and safety reasons), so the one last job was done: touching up the paintwork.

As anyone will tell you who is involved in an art gallery, the sheer amount of white emulsion used is mind boggling. In most cases the walls all have to be white washed before a show, then re painted afterwards to keep them looking pristine and dazzling. We were lucky to an extent…the walls had been painted for the Marina de Stacpoole show a few weeks previously, and didn’t need a complete re – paint. The only part that needed a touch up was the store room door (opening it with your foot seems to be a habit in Gallery II), followed by covering the mirror plates so they blended in, to make the etchings look like they’re floating on the walls.

The door was easy, the mirror plates however, were a different kettle of fish. In total, there was 42 to paint…and each one had to be done in thin coats, by hand, to make sure you didn’t get any on the frames (the cheapest of which costs around £150). 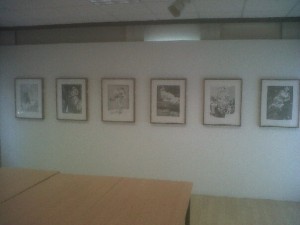 With that painstakingly done, and the etchings all appearing to float on the walls, we were finished. There was nothing else we could physically do for the day…we would just have to wait and see if everything that we needed would be delivered on time by the next day!