After the launch of ‘Paula Rego – New Etchings’ life in the gallery has become somewhat routine, with the space being opened up and the show prepared for the days visitors for just over a week now. However, that peaceful routine was interrupted this week when the gallery team left Dave the invigilator to invigilate by himself, while the rest of us made the arduous trip over the campus to the atrium to hang Amelia Crouch’s Text Pieces for their display until 24th January,

The morning started with a trip deep into the bowels of the University of Bradford to collect the last 6 of Amelia’s pieces, fresh off the laser jet, followed by a cautious walk back to the Atrium, work in hand. Somewhere along the way disaster struck, one of the pieces arrived with a tiny tear along the top…but luckily for us the ever resourceful Charlie Meecham (photography lecturer) was on hand to glue and smooth it back together…crisis dodged.

By the time we had made it back to the Atrium, Keith was already waiting to hang the work with John, his assistant for the day 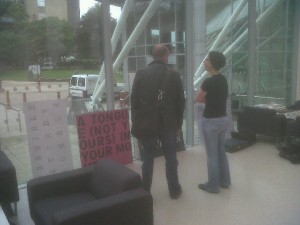 Just like with the Paula Rego etchings, Keith was lightning fast and had the majority of the work hung within the hour. The only thing that stopped us getting all of it hung was that familiar nemesis…lunch.

Lunch came and went (with James keeping guard of the un-hung work left in the Atrium), and everyone returned, full of energy and food.

The second half of the work to be displayed was carefully moved to the other side of the atrium and put in place what would be its new home for the next few weeks. The size of the walls offered a great space for showing the work, and there were only 2 problems with them.

Number one was probably the most difficult and annoying. The previous work had been stuck to the wall so fiercely that when the Velcro was pulled off, so were large chunks of the paintwork. Magnify that by about 30 – 40 pieces of Velcro and you’ve got a bit of an eyesore! Once the work was going up, the team found that it was quite a lot bigger than the previous set, so covered up most of the patches…only a few were visible, and Caroline had it on good authority that they would be painted over before the end of the week.

Problem two was a different kettle of fish. The last wall that Amelia’s work was being hung on sloped at the bottom, meaning that no matter how straight the work was hung, it still looked wonky unless you viewed it from the side or far away…this caused quite a few debates and re-positionings between Keith, john and Caroline, but eventually everyone (including Amelia) was in agreement that they were where they should have been. 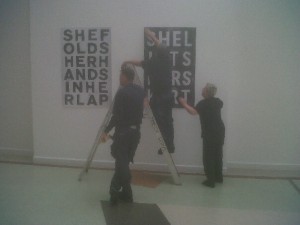 With Amelia’s work hung and looking fantastic, all that was left to do was panic that the walls would be re-painted in time for the University of Bradford Arts Launch that was happening the day after, and would play host to a number of V.I.P’s from Gallery II, Theatre in the Mill, and the Tasmin Little Music Centre.